In final part of the cross-examination of Radmilo Jasak, former analyst with the HVO Military Intelligence Service, the prosecutor put it to him that the HVO ‘turned its back on the BH Army, making an alliance with the Serbs’ in the summer of 1993. The witness explained that the alliance was ‘a necessary evil’ because of the Croats in the Konjic enclave faced a difficult situation 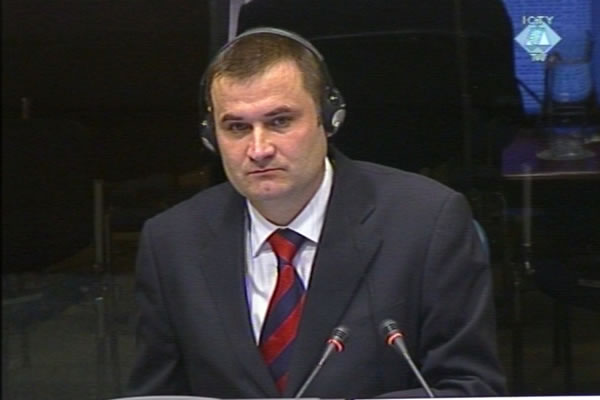 Radmilo Jasak, defence witness of Milivoj Petkovic
Radmilo Jasak, former commander of the 4th Battalion in Mostar and analyst in the HVO Military Intelligence Service maintained in his examination-in chief that after the conflict in Mostar on 9 May 1993 the HVO and the BH Army were ‘allies’ in the fight against the Bosnian Serb army. This ‘alliance’ against the Bosnian Serb army lasted until 30 June 1993, when most Muslim members of the HVO ‘turned their backs on their former fellow fighters’ and joined the BH Army. According to the witness, this led to a ‘total war’ between Croats and Muslims.

In his cross-examination, the prosecution was trying to prove that exactly the opposite happened: the HVO ‘turned its back on the BH Army’ by making an alliance with the Serbs. According to the prosecution, the HVO, headed by its chief of Main Staff Milivoj Petkovic, signed agreements with the VRS in the period described by the witness as ‘the time when the HVO and the BH Army were allies’. Some agreements called for artillery attacks on the BH Army positions. A series of documents about various agreements between the HVO and the ‘XY’ side in June 1993 was used to corroborate the prosecution’s claims.

According to one of those documents, HVO commander Zeljko Siljeg issued an order to the Herceg Stjepan Brigade on 22 June 1993 to ask the ‘XY side’ to open fire on Konjic and Celebici. Two days later, in his letter to the HVO commander in Kiseljak Ivica Rajic, Petkovic says that the ‘XY side is impatient and wants a nice present’. The witness confirmed that the ‘XY side’ was in fact Serb side. Nevertheless, the witness played down the importance of the Serb-Croat cooperation. According to him, the cooperation was justified by the difficult position Croats faced in the Konjic enclave which was ‘surrounded by the BH Army’. This is why, the witness contended, it was agreed to let a humanitarian convoy pass through the Serb-held territory towards Konjic.

The prosecutor then confronted the witness with a document in which Rajic informs the Defense Department and the HVO Main Staff that ‘some materiel’ should be taken over from the Serb forces in Stolac on 25 June 1993. The witness replied that ‘at that time’ Petkovic was negotiating the passage of humanitarian aid to Croats with the commander of the VRS Herzegovina Corps.

The prosecution then brought up another document where Rajic says that his request to buy arms is already on ‘Mladic’s desk’, adding that he received confirmation that a quantity of arms could be delivered immediately. In another document, Petkovic tells Rajic to tell ‘the other side’ that the agreement to take over the materiel was accepted. Petkovic also suggests that Rajic ask Serbs to provide ‘artillery support’, adding that ‘every time they help us we help them’. According to the prosecution, ‘it should be clear to any analyst that the HVO turned its back on the BH Army and linked up with the Serbs to fight against the BH Army’: this upset the Muslims in the HVO ranks. When Petkovic’s lawyer reexamined the witness, he said that the alliance with the Serbs was a ‘necessary evil’.