DID PEACE AGREEMENT BRING ON PEACE OR WAR?

Continuing the cross-examination of Radmilo Jasak, the prosecution suggested that Bosnian Croats misinterpreted the Vance-Owen peace plan, thinking that they should have all the power in the three Croat majority provinces. The defense witness contends that for the Croats, the peace plan meant the end of the war. The HVO was not responsible for starting the conflict with the BH Army 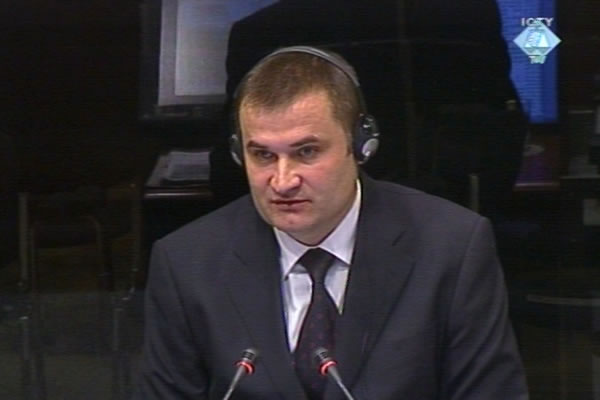 Radmilo Jasak, defence witness of Milivoj Petkovic
Continuing the cross-examination of Radmilo Jasak, former commander of the 4th Battalion and analyst in the HVO Military Intelligence Service, the prosecution suggested that the HVO – and not the BH Army – was responsible for the Croat-Muslim conflict. As alleged in the indictment, the conflict broke out in late 1992 and escalated in the summer of 1993. The prosecution contends that the conflict was caused by the HVO’s forcible attempt to implement the Vance-Owen peace plan.

According to the prosecutor, the Croats ‘misinterpreted’ the plan: they thought that Croats should have exclusive power in the Herceg Bosna provinces. On 15 January 1993, the HVO issued an ultimatum to the BH Army to either subordinate to the HVO or leave the provinces under Croat control. The prosecutor brought up Petkovic’s order of 15 January 1993, which says that the BH Army units that refuse to subordinate to the HVO will be regarded as paramilitary and will be disarmed. The witness said, ‘it was never implemented’.

The witness maintained that the signing of Vance-Owen peace plan meant ‘the end of the war’ for Croats and not the beginning of it, as the prosecutor put it to him. According to the witness, there was no reason not to implement the plan after Izetbegovic ‘accepted it in full’ in the spring of 1993.

The prosecutor then brought up a meeting between the BH Army and BH MUP representatives on 20 March 1993. The participants discussed the military and security situation in the municipalities of Hadzici, Jablanica and Konjic. Concerns were voiced ‘about the attempts of the HVO to establish parallel power structures in some municipalities, including Konjic and Jablanica’. The witness replied that he knew nothing of any such attempts of the HVO.

In his examination-in chief, the witness claimed that on 23 March 1993 the BH Army launched an ‘unprovoked’ attack on the HVO positions in the Konjic area. In the witness’s opinion, this was the first serious conflict between the armies that used to be allies. The prosecutor implied that the attack was caused by the HVO attacks, quoting an UNPROFOR report from that period, which says that the HVO attacked the Muslim village of Here, east of Prozor, on 21 March 1993. ‘This I do not know’, replied the witness.

The prosecutor then brought up an article published in April 1993 in Belgrade newspaper Borba, which says that ‘if Izetbegovic doesn’t sign the agreement by 15 April 1993 the HVO will unilaterally take over power in provinces 3, 8 and 10’. The witness claimed that the ‘HVO issued no ultimatums’. When the prosecutor showed the witness Miljenko Lasic’s order about an HVO attack in the Jablanica area on 14 April 1993, Jasak said that the HVO actually counterattacked in response to the BH Army provocations. According to the witness, it was a matter of ‘active defense’.