OLD BRIDGE WAS IN THE MIDDLE OF BATTLEGROUND

In his cross-examination by the prosecution, Vinko Maric said he ‘didn’t know a single HVO soldier who would want to destroy the Old Bridge’. Maric is testifying in the defense of Milivoj Petkovic. The prosecution brought up HVO documents which indicate that the shelling of the old part of Eastern Mostar was ordered on 8 November 1993. The Old Bridge, located in that part of the town, was destroyed on 9 November 1993 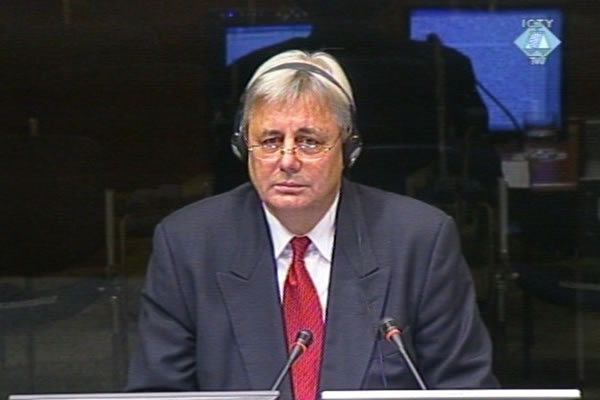 Vinko Maric, defence witness of Milivoj Petkovic
‘I didn’t know a single HVO soldier who would want to destroy the Old Bridge’, former chief of artillery in the HVO Vinko Maric said. Maric gives evidence in the defense of General Milivoj Petkovic. The destruction of the famous bridge over the Neretva on 9 November 1993 is among the charges against the former chief of the HVO Main Staff and five other former Herceg Bosna leaders.

‘The Old Bridge was a part of every citizen of Mostar’, the witness said, denying the prosecutor’s claim that the bridge was destroyed by the HVO. Prosecutor Kimberly West implied that the outrage caused by the act of destruction of this cultural and historical monument would make anybody who wanted to destroy it struggle to remain anonymous. The prosecution implied this might be the reason why there are no explicit orders to target the bridge in any of the HVO documents.

The prosecutor showed an HVO document of 8 November 1993 ordering ‘selective shelling’ of East Mostar. The prosecution contends that the order was issued by the accused Milivoj Petkovic, but Petkovic’s defense rejected this claim, arguing that the order was not signed because it was sent using packet radio.

The prosecution went on to show several reports drafted by Miljenko Lasic, Southeastern Herzegovina Operational Zone commander. In the first report drafted on 8 November 1993, Lasic says that an HVO tank on Stotina fired 50 rounds on the Old Town that day. The Old Bridge is located in the old part of the town. In the next report drafted on 9 November 1993, Lasic says that at around 10 a.m., an HVO tank fired several rounds on a ‘pre-determined target’, and then goes on to say that the scouts on Mount Hum informed him that the bridge had collapsed.

Finally the witness was shown Lasic’s third report of 10 November 1993, where Lasic claims that the ‘HVO never shelled the Old Bridge’, noting further down that the bridge collapsed ‘as a result of combat operations because it was in the middle of the battleground’. The witness said that it was ‘possible that the HVO shelled the Old Bridge at times’. It was a ‘legitimate military target because the BH Army used it for military purposes, shelling the HVO positions from locations close to the bridge, the witness said. According to witness, the Old Bridge may have been destroyed by the fire from the other side, the BH Army.

On the video tapes of the shelling and collapse of the Old Bridge on 8 and 9 November 1993 played in the courtroom, HVO tanks could be seen firing in the direction of the bridge, presiding judge Antonetti noted. It was also obvious – at least from the recordings – that the BH Army didn’t return fire. The witness said he didn’t know what could be seen in the footage. If the HVO soldiers opened fire in the direction of the bridge, it meant that their lives were in danger from that side, the witness added.