Continuing its case, Milivoj Petkovic’s defense called retired brigadier in the BH Army Vinko Maric, who claimed that every HVO soldier was a ‘loyal defender of BH’ 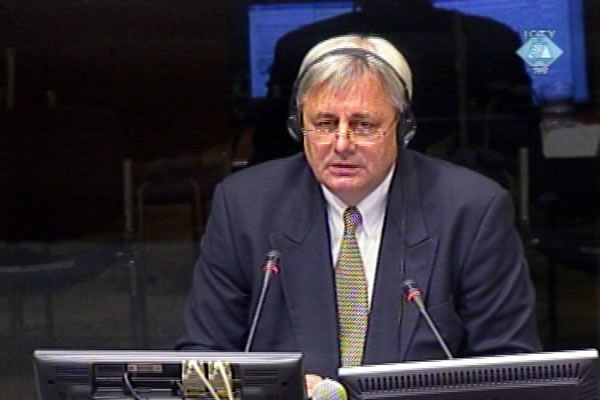 Vinko Maric, defence witness of Milivoj Petkovic
The trial of former Bosnian Croat leaders continued after the winter recess with the evidence of retired BH Army brigadier Vinko Maric, called by the defense of the former chief of the HVO Main Staff, Milivoj Petkovic.

Until the wars broke out in the former Yugoslavia, Maric was a reserve soldier in the JNA Mostar Brigade. In late 1991, he joined the effort to set up the defense of the town against the JNA. His specialty in the JNA was artillery: this defined his military career in the HVO. During the Croatian-Muslim conflict from late 1992 to April 1994, he was chief of artillery in the South-Eastern Herzegovina Operations Zone.

In the first part of his examination-in chief, the witness confirmed the defense argument that the HVO was established as a multi-ethnic army with the goal of ‘defending’ BH – not only Croats and Herceg Bosna, as the prosecution alleges – against the Serb aggression. ‘I fought for my homeland, BH’, the witness said adding, ‘each of my soldiers was a loyal defender of BH’.

The witness said that in late 1991 and early 1992 the HVO organized the defense of Mostar, Stolac and Capljina together with the local Muslims against the Bosnian Serb army. According to him, in late 1992 the HVO launched Operation Bura to push back Bosnian Serb troops in the Neretva River valley. The witness also noted that throughout the war, Serbs shelled Mostar.

The witness confirmed that the time he had served in the HVO counted towards his pension, adding that he is still on good terms with his colleagues in the BH Army. The witness boasted that ‘a high ranking Muslim officer in the BH Army’ wished him a nice trip before he left to give evidence in The Hague; he didn’t give the officer’s name. The witness continues his evidence tomorrow.