According to the former deputy commander of the Central Bosnia Operational Zone Filip Filipovic, all Croats in that part of BH were clear that Alija Izetbegovic wanted to build an Islamic, ‘green’ state 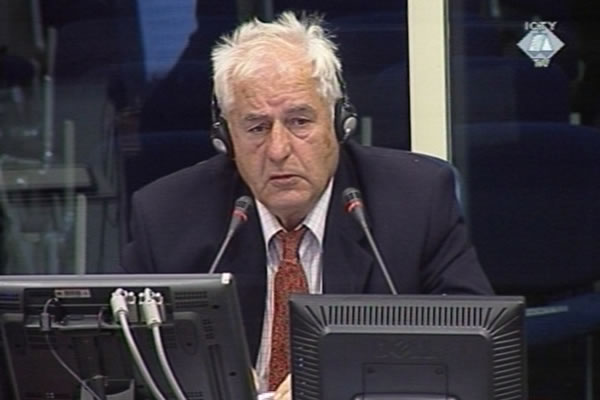 Filip Filipović, svjedok odbrane Milivoja Petkovića
‘All Croats in Central Bosnia thought that Alija Izetbegovic was trying to build an Islamic, green state’, retired general in the BH Federation Army Filip Filipovic said in the cross-examination by the defense counsel of the former Herceg Bosna defense minister Bruno Stojic. Testifying in the defense of General Milivoj Petkovic the witness explained in his examination-in chief that when he said ‘green’ he meant ‘Muslim’. According to the witness, this term has no derogatory meaning: he called Croats ‘the blues’ and Serbs ‘the reds’. The HVO used those colors to mark on its maps the territories under the control of the three BH ethnic groups, Filipovic explained.

Arguing that Izetbegovic wanted to create an Islamic state, Stojic’s defense counsel Senka Nozica mentioned as an example a report drafted by former Security Administration chief Fikret Muslimovic on 10 March 1993. Reporting on the activities of the 7th Muslim Brigade to Izetbegovic and other recipients, Muslimovic speaks about various crimes committed by the 7th Muslim Brigade ‘that have ruined the good name of the BH Army’. Muslimovic claims that ‘there is a widespread opinion that the SDA leadership in Zenica is behind those criminal activities, and it proves that Izetbegovic gives lip service to a civil state while in fact he is building an Islamic country’.

For the witness and other Croats in Central Bosnia there was no dilemma: Izetbegovic said one thing and did the other. ‘How can we speak about a multi-ethnic and civil state when I am stripped of my right to say that I defend Bosnia Herzegovina and to fly my flag’, the witness asked.

Stojic’s defense also tried to prove that in late January 1993, the BH Army started ‘open aggression’ on the HVO in Busovaca, Vitez, Travnik, Novi Travnik and Kiseljak. A document drafted on 26 January 1993, signed by the Central Bosnia Operational Zone commander Tihomir Blaskic, Herceg Bosna vice-president Dario Kordic and others, notes that the Mujahideen spearheaded the BH Army attack on Busovaca.

The prosecution objected to any questions being asked about this document, suggesting that this was a case of a tu quoque defense, based on bringing up the crimes committed by the other side. Judge Antonetti noted that the document contained relevant information which might have bearing on the international character of the conflict, because the letter sought help from the Croatian president Franjo Tudjman.

When he was asked why the president of another country was asked to provide troops and arms, the witness said, ‘when your life is at stake you can’t be picky about means’. As for the foreign fighters, the witness said there were 1,000 to 1,500 Mujahideen in the Lasva valley. The real problem was that as time went by, a growing number of local fighters joined the Mujahideen, he added. The Mujahideen were not the main cause of the conflict between the BH Army and Croats, the witness said: the biggest problem was the huge influx of refugees which threatened the ‘survival’ of the Croats in that area.