As Filip Filipovic, former deputy commander of the Central Bosnia Operational Zone continues his evidence, General Milivoj Petkovic’s defense showed a video of a meeting in Jablanica on 4 May 1993. At the meeting, the HVO and the BH Army commanders tried to see if they would continue being allies or would become enemies as the war continued 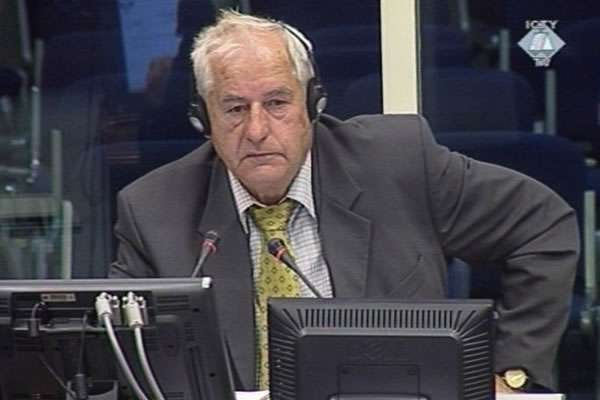 Filip Filipović, svjedok odbrane Milivoja Petkovića
As the former deputy commander of the Central Bosnia Operational Zone Filip Filipovic continued his evidence, General Milivoj Petkovic’s defense showed a video of a meeting in Jablanica on 4 May 1993. The witness attended the meeting of the highest representatives of the BH Army and the HVO, under the auspices of the UN Spanish Battalion. Sefer Halilovic, the commander of the BH Army, and Milivoj Petkovic, chief of the HVO Main Staff, tried to see if they would be continue being allies or would become enemies as the war continued.

Offering a military alliance and friendship, Halilovic asked Petkovic to prevent the HVO from expelling and arresting Muslim civilians in their territory. Halilovic warned that the state itself was at threat because the Croats wouldn’t let the humanitarian convoys pass through. Arif Pasalic, who commanded the BH Army 4th Corps, demanded the release of the BH Army soldiers, and criticized the Croat side because of the HVO camps and prisons in Heliodrom, Mostar, Ljubuski and Grude in Herzegovina and in Imotski in Croatia. Pasalic also warned that the HVO had turned Mostar into a concentration camp where the Muslims were denied freedom of movement.

Unlike Halilovic and Pasalic, who were emotional and rather harsh, Petkovic was calm when he said he wanted them to give him the names of all the BH Army soldiers under arrest. Petkovic promised he would personally make sure that all those men were set free that same evening. In return, Petkovic wanted the HVO troops arrested by the BH Army in Zenica to be released. He also offered to accompany Halilovic to Sovici and Doljani and then to Mostar, Capljina and other places where there were problems according to the BH Army, and then to go to Zenica. Finally, Petkovic and Halilovic shook hands on the agreement that the BH Army and the HVO would remain allies in their fight against the VRS.

Filipovic contends that Halilovic’s story about the state collapsing was just a ‘play staged for the international community’. According to Filipovic, Halilovic kept saying that ‘the BH Army is the only legal army’: all the others, including the HVO were illegal then. This was ‘like what Goebbels used to say: if you tell a lie a hundred times it becomes the truth’, the witness noted. ‘His green flag is the most important and my tricolor is worth nothing’, the witness concluded. According to the witness, Petkovic was ‘too calm’ at that meeting.