WAS KONJIC CAPTURED OR DEFENDED? 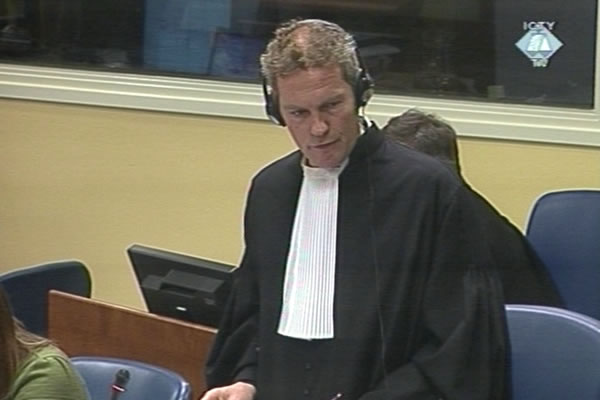 Roeland Bos, tužilac na suđenju Jadranku Prliću, Milivoju Petkoviću, Bruni Stojiću, Slobodanu Praljku, Valentinu Ćoriću i Berislavu Pušiću
A former HVO member is testifying with protective measures in the defense of General Milivoj Petkovic. In his examination-in chief the witness argued that in March 1993 the BH Army launched an offensive against the HVO positions to take over Konjic and the Neretva river valley and then advance towards the sea. The prosecution in its cross-examination implied that the BH Army plans of March 1993 were defensive: merely a series of precautionary measures against the invasion plans of the HVO. The defense claims that those plans are key evidence corroborating its argument that the BH Army attacked Herceg Bosna.

The prosecutor noted that the HVO proceeded to establish its parallel authorities in ‘Croatian’ municipalities, despite the decision of the BH Constitutional Court of September 1992 ruling that the Croatian Community of Herceg Bosna was unconstitutional. This is what happened in Konjic, the prosecutor argued, although the Croats were a minority and Muslims had majority in the municipality.

The prosecution then suggested to the witness that Croats in Konjic established parallel bodies in preparation for the takeover of power in the town located because Konjic was part of the self-proclaimed Herceg Bosna. ‘We had to fight for our interests in any way we could’, the witness replied. According to the witness, the ruling of the Constitutional Court was not valid for the Croats in Konjic because it was passed by ‘Muslim judges’.

The prosecutor showed European monitors’ reports about ‘the ethnic cleansing’ of the Muslims by the HVO in the neighboring municipality of Prozor in October 1992. Noting that the HVO and the BH Army clashed in Gornji Vakuf in January 1993, the prosecutor implied that the Muslims in Konjic had reasons to fear that the HVO attacks would spill over into their municipality. The witness said that ‘there was no reason to fear’ the HVO attacks in Konjic because the BH Army in the town had more personnel and better weapons.

The prosecutor also brought up Milivoj Petkovic’s order that the BH Army had to be resubordinated to the HVO in provinces 3, 8 and 10 by 20 January 1993 or withdraw from there. The witness said he had no knowledge of that order. According to him, even if the order was forwarded to his commander, nobody did anything to implement it. The Croats in Konjic were more inclined towards finding peaceful solutions, the witness said.