GENERAL DJORDJEVIC AS A MESSENGER

Testifying in his own defense, police general Vlastimir Djordjevic described his role in the transfer of the Albanians’ bodies from a refrigerated truck that had sunk near Kladovo to Belgrade and in the burial of bodies that had surfaced in the Perucac lake 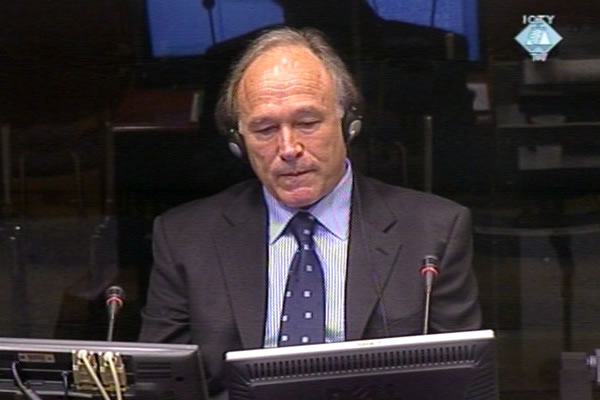 Vlastimir Đorđević svjedoči u svoju odbranu
Former chief of the Serbian MUP Public Security Department Vlastimir Djordjevic contends that he was ‘perplexed and surprised’ when he learned that that the Bor SUP police discovered a refrigerated truck loaded with bodies of Kosovo Albanian civilians in the Danube river near the town of Tekija on 6 April 1999. Chief of the Bor SUP Caslav Golubovic informed Djordjevic about that. Golubovic already testified about the refrigerated trucks at the trials of Slobodan Milosevic, the Kosovo Six and at the trial of General Djordjevic. The prosecution charged Djordjevic with crimes perpetrated by the Serbian police in Kosovo in the first half of 1999 and with organizing a secret operation to cover up the crimes.

For the most part Djordjevic confirmed what Golubovic had said at the three trials, but he insisted that his role was to ‘transmit’ the information from the chief of the Bor SUP to interior minister Vlajko Stojiljkovic, and then to ‘relay’ the interior minister’s orders back to Golubovic. According to Djordjevic, Stojiljkovic ‘ordered that bodies of Kosovo Albanians be buried there where they were discovered’. Djordjevic wanted to get a clearer picture, and he proposed to the interior minister to establish a commission to investigate ‘how the bodies ended up’ in the refrigerated truck in the Danube river. Stojiljkovic told Djordjevic that ‘he was behind that, that the incidents happened and something was to be done’.

When Golubovic told Djordjevic that there were many more bodies in the refrigerated truck than they had initially estimated, Djordjevic ‘transmitted’ that information to the interior minister. The minister ordered him to ‘find a vehicle, load the bodies, take off for Belgrade and destroy the refrigerated truck’. Djordjevic relayed the order back to Golubovic. Djordjevic contends that he then told the minister that he ‘had nothing to do with the bodies until then’ and that he ‘wanted to stay out of it’.

Some days later, Djordjevic got yet another phone call, this time from the Uzice SUP chief Djordje Keric who called to tell him that he had seen some bodies floating in the Perucac lake. In his evidence for the prosecution, Keric said that Djordjevic ordered him to organize the burial of those bodies in a mass grave and not to notify the district prosecutor and the investigative judge. Djordjevic today said that Minister Stojiljkovic first ordered him to bury the bodies near the lake and then ‘issued the order for their exhumation’. The bodies were then transferred to the training grounds of the Special Anti-Terrorist Unit in Batajnica near Belgrade.

According to Djordjevic, he was ‘not pleased that things developed like that’. He was absolutely sure he couldn’t have done anything about those who lost their lives. This is why, as he said, ‘I was sorry I had to execute the minister’s order’; he will be unhappy about that for as long as he lives. Vlajko Stojiljkovic was indicted for the same crimes as Djordjevic, but he never stood trial because he committed suicide in 2002. Djordjevic continues his evidence tomorrow.