DJORDJEVIC DENIES THERE WAS A JOINT COMMAND

The prosecutor showed Djordjevic a series of documents that according to him confirm the existence of the Joint Command of the VJ and Serbian MUP for Kosovo. Vlastimir Djordjevic, former Public Security Department chief, nevertheless denied that such a body had ever been established 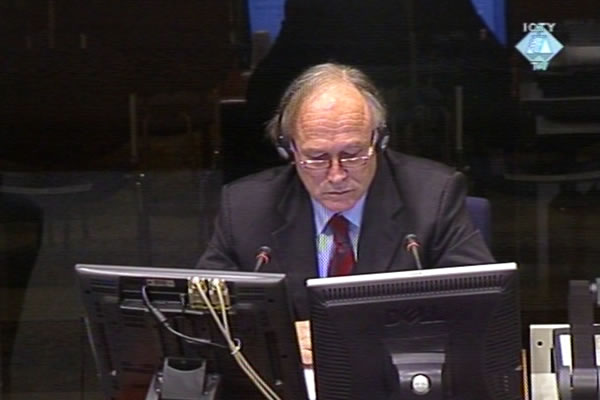 Vlastimir Đorđević svjedoči u svoju odbranu
Continuing the cross-examination of police General Vlastimir Djordjevic, the prosecutor noted that the accused, as the chief of the Serbian MUP Public Security Department, was a member of the Joint Command of the Army and Police in Kosovo. The prosecution contends that Slobodan Milosevic controlled the situation in Kosovo and tried to ethnically cleanse it of the Albanian civilians through that body in 1998 and 1999.

The prosecutor first showed Djordjevic a document the Tribunal received in 2002 from the FRY Justice Ministry. The document says that the Joint Command was created on the orders of President Slobodan Milosevic in June 1998. Djordjevic replied that he ‘didn’t attend that meeting’ adding that the Justice Ministry document ‘was not true’.

A series of minutes from meetings of the Joint Command in October 1998 in Pristina were shown to Djordjevic. According to the minutes, Djordjevic attended those meetings. The accused nevertheless denied he was present at the meetings. Djordjevic argued that his involvement in Kosovo ‘ended with the implementation of the global plan’ to prevent terrorism, on 5 October 1998.

Although some documents state that ‘the Joint Command will exercise command over operations on Kosovo from the forward command post in Djakovica’ Djordjevic argued that the body had never been established. He claimed the term was ‘coined by the army’ and that the body ‘had none of the features that characterize a command’. According to Djordjevic, there was no joint command, but a ‘joint coordination body of the structures that were to operate in Kosovo’.

The prosecution went on to show the minutes from a Joint Command meeting in January 1999, where it was said that armed Serb civilians were used in combat. Djordjevic maintained that ‘armed villagers were never used as a force acting in concert with the army or police, and they were not attached to them to take part in the activities’. According to the accused, villagers were under the obligation to protect their villagers ‘and had nothing to do with any attacks’.

The indictment alleges that Djordjevic, as the Public Security Department chief, assistant minister and a member of the Joint Command, took part in providing arms and training to ‘predominantly non-Albanian civilians who formed local or village defense units’. The prosecution contends that those units acted under the command of the VJ and/or the Serbian MUP and were under their jurisdiction.