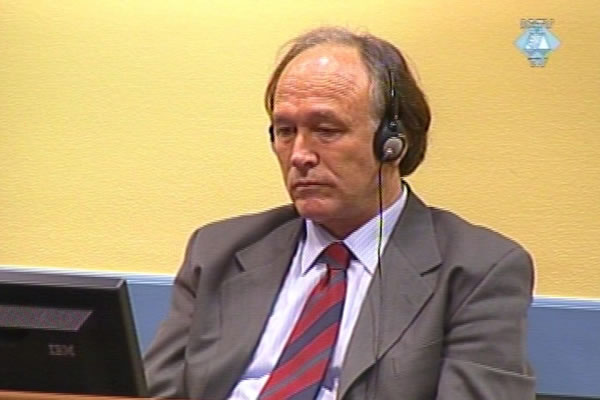 Vlastimir Đorđević u sudnici Tribunala
The defense counsel of Vlastimir Djordjevic, former chief of the Serbian MUP Public Security Department, indicated in its opening statement today that it will prove that in 1998 and 1999 ‘there was no body or a system of command in Serbia nor in FRY whose aim was to conduct widespread and systematic actions to expel the Albanian population from Kosovo, destroy their personal property, personal documents, places of worship and to abuse and kill them’.

The defense will contest the prosecution’s argument that there was a joint criminal enterprise in which Djordjevic was a participant, and the claim that Djordjevic ‘commanded, controlled, directed and in other ways exercised effective power over all the units of the Public Security Department and over its subordinate units in Kosovo that perpetrated crimes the accused is charged with’.

The defense argues that as the RJB chief, Djordjevic didn’t receive any reports on the planning, organization and execution of anti-terrorists actions in 1999’. Djordjevic ‘didn’t have effective control over the police units taking part in the defense of the country’, the defense counsel said. ‘Djordjevic didn’t plan or organize the transportation of bodies from Kosovo in 1999’, his lawyer said. The Public Security Department operations were regulated through the MUP Staff for the prevention of terrorism in Kosovo, the defense noted; its mandate, composition and responsibilities were defined by the interior minister Vlajko Stoijljkovic.

As the defense indicated, the Trial Chamber will hear evidence about the creation of the so-called Joint Command of the army and the police and its role in 1998. A more appropriate name would have been ‘joint coordination body’, the defense continued, as its role was to facilitate the exchange of information and coordinate the MUP and the army efforts. The defense will show that the body was not authorized to issue orders or influence the work of the police and the army or the political structures in Serbia and the FRY.

Expert witnesses will ‘present the historical aspects of the problems in Kosovo and Metohija’ to the judges. Army and police personnel will give evidence in Djordjevic’s defense. They, the defense counsel continued, will ‘show that there was no plan for the deportations, ethnic cleansing or dislocation of the population’ from Kosovo. According to the defense, the movements of the population were a result of the NATO and terrorist KLA operations. They created an ‘atmosphere of fear’ in the province, the defense argued. Serbia and FRY had a duty to protect the citizens against the KLA crimes. The MUP and the VJ launched ‘anti-terrorist’ actions, the defense claimed, giving as an example the action in the village of Prekaze, where KLA commander Adem Jashari and 58 civilians, members of Jashari’s family, were killed.

The defense will begin its evidence tomorrow morning; the first witness will be the accused himself. The defense plans to complete Djordjevic examination-in chief in 16 hours. The prosecution will then have the same amount of time to cross-examine him.