In the cross-examination of former HVO commander Bozo Pavlovic, the prosecution implied that the ‘total war’ between Croats and Muslims started several months before the alleged betrayal of the Muslim ‘brothers in arms’ who left the HVO to join the BH Army after Boban’s ultimatum to Alija Izetbegovic 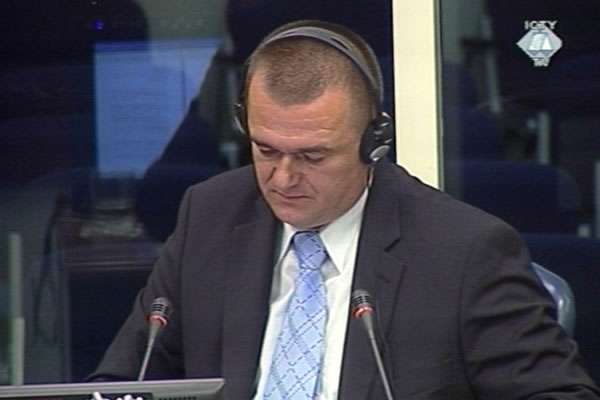 Božo Pavlović, svjedok odbrane Milivoja Petkovića
Former commander of the HVO 3rd Brigade Bozo Pavlovic contended for the most part of his evidence in the defense of General Milivoj Petkovic that the total war between the HVO and the BH Army started on 30 June 1993, when the Croats’ erstwhile ‘brothers in arms’, the Muslim members of the HVO, turned their backs on the Croats and joined the BH Army.

In the cross-examination, the prosecutor suggested that the Bosnian Croats were to blame for the large-scale clashes, showing an ultimatum issued by the president of the Croatian Community of Herceg Bosna Mate Boban to Alija Izetbegovic. Boban wanted Izetbegovic to sign the Vance-Owen peace plan by 15 April 1993; if he refused, the HVO would unilaterally implement the Croat rule in the three provinces that were assigned to Croats according to the peace plan. The prosecutor corroborated this with a press release issued on 4 April 1993.

According to the prosecutor, Boban’s ultimatum was a signal to the BH Army to prepare for problems with the HVO. This is what happened, he said, because on 16 April 1993, a day after the ultimatum expired, the HVO ordered the arrest of a number of the troops from the Bregava brigade of the BH Army in the Stolac municipality. According to the prosecution documents, from early 1993 the HVO tried to put Croats in power in the Stolac municipality despite the objections of the local Muslim population.

The witness maintains he never heard of Boban’s ultimatum. The HVO disarmed a number of troops in the Bregava Brigade on 16 April 1993 'as a precaution’, he said, after they refused to leave the area of responsibility of the HVO Knez Domagoj brigade, under the command of Nedeljko Obradovic. The witness was adamant that the conflict between the HVO and the BH Army broke out because of the purported betrayal of the Muslim members of the HVO in Mostar on 30 June 1993.

Noting that the problems began before 30 June 1993, the prosecutor referred to a report drafted by Zarko Pavlovic, security chief in the Knez Domagoj Brigade, where he says that on ’13 June 1993 the clean-up of rest of the territory around Rotimlje began’ in the Stolac municipality. The report goes on to say that the ‘aim of the HVO is to create a situation in which Muslims would not trust each other and will be easier to control’.

The prosecutor tried to discredit the witness by bringing up documents that incriminate him in the ‘mass expulsion’ of Muslims from Stolac, deportation of patients from the Kosava hospital and taking prisoners to do forced labor on the frontlines.

The prosecutor didn’t miss the opportunity to follow up on yet another, as he put it, ‘peripheral issue’. Reminding the witness of a slogan mentioned in a document drafted by the BH Army commander Sefer Halilovic – ‘Death to fascism – freedom to Bosniaks’ - the prosecutor mentioned that Croats often signed off their official documents with the words ‘God and Croats’.