According to Bozo Pavlovic, former commander of the HVO brigade in Stolac, the total war between Croats and Muslims broke out after ‘the betrayal’ of the Muslim members of the HVO on 30 June 1993 when they attacked the HVO soldiers in the Northern Camp in Mostar 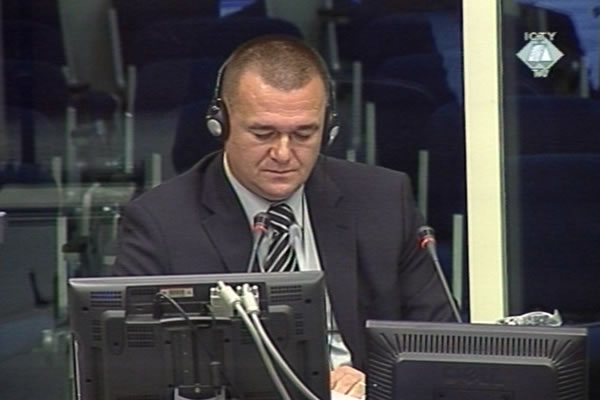 Božo Pavlović, svjedok odbrane Milivoja Petkovića
The total war between Croats and Muslims started after ‘the betrayal’ of the HVO Muslim members. On 30 June 1993, they attacked the HVO troops in the Northern Camp in Mostar, says Bozo Pavlovic, former commander of the HVO 3rd Brigade in Stolac. Pavlovic is testifying as a defense witness of former chief of the HVO Main Staff Milivoj Petkovic. Until that day, Muslims and Croats fought ‘shoulder to shoulder defending the town against the common enemy’, he said.

In September 1991 Pavlovic left the JNA to join the ‘preparations for the defense of BH’. In April 1992, Pavlovic took part in the operations to liberate Mostar from the Bosnian Serb forces supported by the JNA. After that, on 1 July 1992 Pavlovic was appointed the first commander of the municipal HVO staff in Stolac and soon after commander of the HVO 3rd Brigade in the town. Pavlovic remained at that post until 4 October 1993. After the war, Pavlovic worked for some time in the BH Defense Ministry and retired in December 2006 as a colonel in the BH Armed Forces.

The witness blamed various public figures such as Mehmed Dizdar, Mirsad Mahmutcehajic, Esad Suto and Alija Rizvanbegovic for the deterioration of the relations between Croats and Muslims in Stolac. According to the witness, in January 1993 they started pressuring the Muslims cooperating with the HVO to move to the BH Army. ‘Another kind of provocation’ the witness described was disobedience and lack of discipline of the Stolac Bregeva brigade, which consisted mainly of Muslim soldiers.

As far as the witness knows, the allegations made by the president of the BH presidency Alija Izetbegovic in his letter to Franjo Tudjman on 21 May 1993 were entirely wrong. In the letter, Izetbegovic told Tudjman about the HVO’s ethnic cleansing of Muslims in Stolac on Boban’s orders. The witness claims that Boban himself told him about the letter. Boban asked Pavlovic to explain the expulsions of civilians from Stolac. Since nothing of the sort was actually going on in Stolac, the witness claims, he reported to Boban that everything was all right.

The witness said he received the order to ‘isolate’ the Muslim members of the HVO in Stolac from his superior, Nedjeljko Obradovic, in the evening of 30 June 1993. As the witness put it, they couldn’t believe it when they heard ‘about the betrayal’ of their Muslim fellow fighters in Mostar. ‘For me personally it was the most difficult moment in my life’, Pavlovic said, noting that he and other HVO commanders followed the order without demur when ‘the gravity of the situation’ was explained to them.

The next day, on 1 June 1993, the HVO in Stolac disarmed the Muslim members of the HVO. According to the witness, they were first taken to a construction steel component factory in Stolac. From there they were taken to the Grabovina HVO barracks in Capljina. After that he had no contact with them, the witness maintained. Pavlovic continues his evidence tomorrow.