WHO WAS SPARED ABUSE

In the cross-examination, the prosecutor confronted Dragan Curcic, former commander of the Ludvig Pavlovic Independent Battalion of the HVO, with his request to the local police in Capljina to ‘spare from abuse’ the mother of one of his Muslim soldiers. The trial continues on 26 October 2009 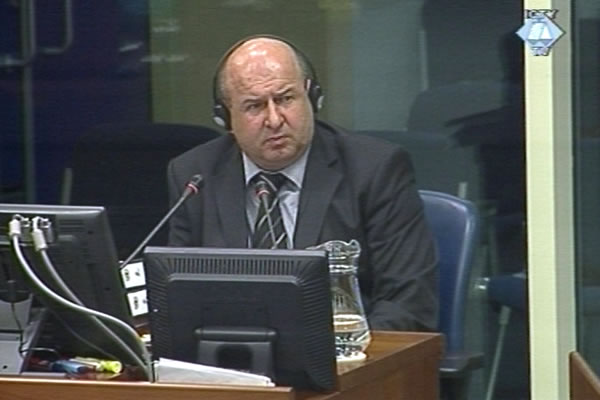 Dragan Čurčić, svjedok odbrane Slobodana Praljka
Dragan Curcic, former commander of the Ludvig Pavlovic Independent Battalion of the HVO, was cross-examined today. He confirmed his participation in the arrests of Muslim men of military age in the Capljina area in the summer of 1993. Although he confirmed there were arrests of women and children, Curcic claimed he had never seen anything of the sort.

When asked if he knew that women and children were being arrested in the Capljina and Stolac areas, the witness said that he ‘personally never saw’ anything of the sort, but that things like that happened; ‘there is no running away from the fact’. Among other things, the witness contended that he didn’t know about the abuse of female detainees. The prosecution then showed the witness his own request to the local police in Capljina to ‘spare the abuse’ the mother of one of his Muslim soldiers. The witness replied that he wanted to help his soldier. Also, the witness couldn’t say why anybody would abuse a woman who, as the prosecution noted, was at least 50 years old.

The prosecutor argued that the Kralj Tomislav Brigade under the command of Nijaz Baltak, a.k.a. Mate Sarlija Daidza, was part of the Croatian Army. According to the prosecution, an element of that brigade formed the core of the Ludvig Pavlovic Battalion of the HVO in 1993; it was funded by the Croatian defense ministry. The witness confirmed that he was a member of the Croatian Army, but he tried to deny that General Janko Bobetko was his immediate superior despite the fact that he had addressed Bobetko with those exact words in a letter from March 1994.

In response to the prosecutor’s questions, the witness admitted that he would like the most if the Croats in BH had their own state. The prosecutor then implied that he had fought in the war for that goal and eventually for the unification with its ‘financial master’, Croatia, but the witness disagreed. ‘All Croats in BH would love that, but our reality is Bosnia and Herzegovina’, the witness said.