In his examination of the defense expert, Slobodan Praljak boasted that after the BH Army troops committed the crimes in Uzdol he had to deal with the HVO soldiers not only as their commander, but also as a ‘social psychologist, a strong male figure and a father’ in order to prevent retaliation. This prompted Judge Prandler to tell Praljak that by now everybody clearly understood that Praljak wanted to paint himself as a ‘homo universalis’. Judge Prandler advised Praljak to focus on asking questions 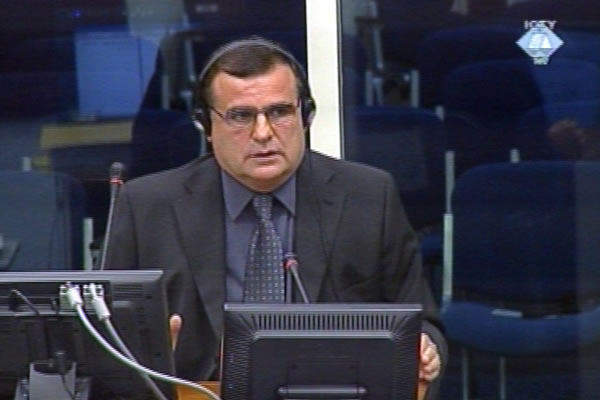 Vladimir Šakić, svjedok odbrane Slobodana Praljka
Vladimir Sakic from the Ivo Pilar Institute for Social Sciences in Zagreb drafted an expert report for the defense of Slobodan Praljak. By applying social psychology methods, Sakic was able to conclude that it was impossible to exercise command over military formations of the Croatian Council of Defense. In the witness’s opinion, this situation was mostly the consequence of lack of organization and authority of military commanders who did not have the range of sanctions normally available in other modern societies.

As he had four semesters of coursework in psychology and has the necessary expertise in that field, the accused Slobodan Praljak was allowed to conduct the examination-in chief of the witness. Instead of asking the witness about the findings in his expert report, Praljak was interested in the basic definitions of terms used by social psychology, such as conformism, aggression and other types of behavior. Praljak also wanted to hear about the influence of heat, increased testosterone secretion and alcohol consumption on aggressive behavior.

Praljak at one point noted that after the BH Army troops committed crimes in Uzdol, he had to deal with the HVO soldiers not only as their commander ‘but also as a social psychologist, a strong male figure and a father’ to prevent retaliation. This prompted the Hungarian judge Arpad Prandler to intervene. It is clear to everyone by this point, he said, that Praljak has been creating a picture of himself as a ‘homo universalis’. Judge Prandler advised Praljak to stop boasting and to focus on his current role: to ask questions and not to make speeches.

In his expert report the witness concludes among other things that the ‘behavior of soldiers is often not a consequence of complying with an order issued by their formal commanders, but of a social situation and powerful affective states’. According to the witness, such soldiers are difficult to control.

As the examination-in chief drew to a close, Swiss judge Stefan Trechsel raised the issue of the role of social psychologists in criminal proceedings. According to the witness, in the case of the six former Bosnian Croat leaders, social psychology can be more pertinent than any other branch of psychology. The judges will have the final say on the matter.