Arguing in favor of its motion to re-open the case against Haradinaj, Balaj and Brahimaj in order for two unwilling witnesses to be examined, the prosecution noted that they refused to testify because they were intimidated. If the appellate judgment confirms this status quo, it would imply that ‘the intimidators won in the end’. The defense opposed the motion, arguing that it was ‘pointless’. There is no indication that the two witnesses in question are willing to testify 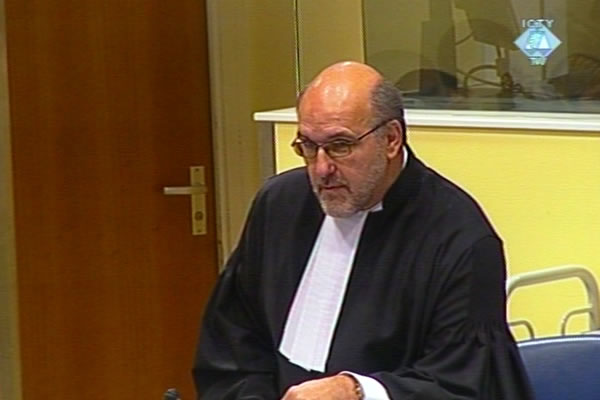 Peter Kremer, tužilac na suđenju Ramusha Haradinaja, Idriza Balaja i Lahija Brahimaja
At the appellate hearing in the case of three former KLA commanders, Haradinaj, Balaj and Brahimaj, the parties presented their arguments on the motion to re-try the case in part. In the first ground of appeal, the prosecution demanded that the case be reopened in order for two witnesses to be examined. Fearing for their safety, those witnesses refused to give evidence in the course of the prosecution case.

On 3 April 2009, the Trial Chamber acquitted Ramush Haradinaj and Idriz Balaj on all 37 counts in the indictment charging them with murder and other crimes against Kosovo Albanians, Serbs and Roma in 1998. Lahi Brahimaj was sentenced to six years for torture and cruel treatment in the KLA camp in Jablanica. The Trial Chamber concluded that the prosecution failed to prove the existence of a joint criminal enterprise aimed at ethnically cleansing Western Kosovo; Brahimaj was convicted only on the basis of individual criminal responsibility.

The prosecution’s motion refers to former KLA member Shefqet Kabashi. In his two statements to the OTP investigators, Kabashi said that Balaj and Brahimaj had beaten up prisoners in the Jablanica camp in Haradinaj’s presence. The second witness, protected by pseudonym, Witness 30, described the same events from a prisoner’s point of view. Both witnesses refused to repeat their statements in the courtroom. The prosecution contends that it did not get a fair trial because the Trial Chamber ended the case before those witnesses were examined. In its appeal, the prosecution argues that both witnesses decided not to testify because they were intimidated and in fear for their personal safety. According to the prosecution, Kabashi’s words to the judges corroborate the claim. Kabashi said, ‘witnesses are being murdered’ in Kosovo, and the protective measures the Tribunal imposes are valid ‘only in the courtroom but not outside’.

Prosecutor Peter Kremer contends that ‘intimidation obviously yielded the desired result, unlike the protective measures’. He demanded that the two witnesses be examined; if they refuse to testify, the prosecution wants the statements they gave to the investigators to be admitted into evidence. Presiding judge Robinson asked, ‘Is it not shocking’ that the motion to admit the statements into evidence was not filed earlier, in the course of the trial. The prosecutor replied that he could only confirm that this was so.

[IMAGE]4397[/IMAGE]In his reply, Haradinaj’s defense counsel Ben Emmerson listed in detail what the Trial Chamber had done to hear the testimony of the two unwilling witnesses: the judges repeatedly delayed the end of the prosecution’s case and issued an indictment against Kabashi for contempt of court. The witnesses however, persistently refused to testify and the Trial Chamber did the right thing, the defense contends, concluding the prosecution’s case. Emerson also argued that the prosecution’s motion was ‘pointless’ as currently there was no indication that Kabashi and Witness 30 would agree to testify in a re-trial. The defense strongly opposed the motion to admit their statements without hearing the witnesses and without their confirmation that the statements are true and accurate.

In his reply to the arguments submitted by Haradinaj’s defense counsel, the prosecutor noted that by granting the motion to reopen the case, the Appeals Chamber would set guidelines to all the trial chambers as to how they should act if there is widespread pressure on the witnesses. ‘This is not a regular situation, it is abnormal, and the Trial Chamber noted this in its judgment but it failed to deal with it properly’, the prosecutor concluded, adding that if the Appeals Chamber fails to grant the motion, ‘the intimidators would have won’.

In addition to asking for a re-trial, the prosecutor urged the Appeals Chamber to convict Idriz Balaj of the rape of witness 61 and torture of her husband and the murder of three females. The defense counsel oppose it because, according to them, the witnesses didn’t positively identify Balaj as a participant in those incidents.

Brahimaj’s defense counsel Harvey corroborated his demand that Lahi Brahimaj be acquitted of torture and cruel treatment, or alternately be given a milder sentence, by noting his client was convicted on the basis of inconsistent evidence of two witnesses, one of whom is purportedly an agent of the Serbian state security service. The defense counsel also said that upon his return to Kosovo, Brahimaj enrolled in a sociology course at the Pristina University. Brahimaj’s long-term goal was to get a law degree and dedicate himself to the fight against corruption. It was not all that clear why the defense counsel thought he should disclose this piece of information from his client’s private life, but presumably he did so because he felt this evidence of Brahimaj’s character may sway the Appeals Chamber to commute his six-year prison sentence.