KOSOVO OFFICIALS ON TRIAL FOR CONTEMPT OF COURT

The prosecution claims it will prove beyond reasonable doubt that Astrit Haraqija, former Kosovo minister and his assistant Bajrush Morina are guilty of contempt of court, alleging that Haraqija and Morina attempted to influence a protected prosecution witness due to testify at the trial of the former KLA commanders. Haraqija is 'offended' by being put in the dock 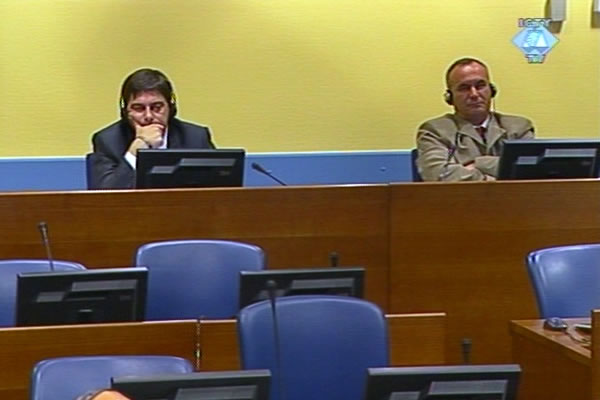 Astrit Haraqija and Bajrush Morina in the courtroom
The trial of former Kosovo minister of culture, youth and sport Astrit Haraqija and his assistant Bajrush Morina started today with the opening statement delivered by the prosecutor, Dan Saxon. Haraqija and Morina are charged with 'contempt of court by attempting to influence a protected witness' in July 2007 to either change his testimony or decide not to testify at the trial of former KLA commanders Haradinaj, Lahi and Brahimaj.

Haraqija, the prosecutor noted, 'directed, encouraged, convinced or pressured Morina' to meet with the protected witness and tell him that he 'is one of the three witnesses who could save Haradinaj'. Such behavior on the part of a person holding an official position makes his personal responsibility graver, the prosecutor noted. The prosecution alternatively charges Haraqija with instigation to commit contempt of court. The evidence the prosecution intends to call will prove beyond reasonable doubt that the accused are guilty, the prosecutor concluded.

Former Kosovo minister pleaded not guilty. In his opening statement given without making the solemn oath, Haraqija said that he was ‘offended by being put in the dock because his name is tarnished and the experience itself is traumatic'. Haraqija took some twenty minutes to recount his career from the leader of the Democratic Union of Kosovo youth section in Djakovica in 1994 to the president of the local administration nine years later in the same town. He wanted to describe the rest of his political career but the Trial Chamber 'unanimously concluded that there was no justification in granting the accused additional time'. The Trial Chamber advised the defense counsel to call the accused to testify if he wanted to get any additional clarifications.

The chief of the Witness Protection Department in the country where the prosecution witness resided was called as a fact witness. The police chief confirmed that he was personally in charge of security of the protected witness who had to be transferred to The Hague to testify at the Haradinaj trial. The witness told him that he had received a phone call and text messages from Bajrush Morina, whom he 'knew as a journalist'. Morina asked to meet with the protected witness. After consulting with the prosecution, the police decided to allow this meeting to proceed. The protected witness wore a wire and his conversation was taped. The prosecution has the tapes but they were not played in the part of the hearing in public session. The public could hear the content of just two Morina's text messages where he asked the witness to book a luxury hotel for him and the minister.

In his cross-examination, Bajrush Morina’s defence counsel tried to prove that the 'taping of private conversations is a violation of privacy' noting that it was an illegal activity. According to the witness, in July 2007 there was no legal provision in his country allowing the recording of conversations and planting of microphones; there was no law in place to prohibit it, either.

The trial of the two former Kosovo officials continued with the evidence of a witness testifying under the pseudonym 2. After his statement was tendered into evidence, he was cross-examined by Bajrush Morina’s defence counsel. The cross-examination pointed to the conclusion that Witness 2 was in fact the protected witness in the Haradinaj case. The defense counsel implied that 'Morina didn't influence the witness to change his testimony or to decide not to testify at the Haradinaj trial'. Witness 2 will continue his evidence tomorrow.