RE-TRIAL FOR HARADINAJ, BALAJ AND BRAHIMAJ

The Appeals Chamber has reversed the acquittal of the three KLA commanders of the charges of crimes against civilians in the prison camp Jablanica in 1998, ordering a re-trial on six counts in the indictment. The prosecution’s request to reverse Balaj’s acquittal on the counts of murder, rape and torture was rejected. Brahimaj’s demand to either quash his conviction or give him a milder sentence was also rejected. An order was issued to bring the accused back to the detention unit 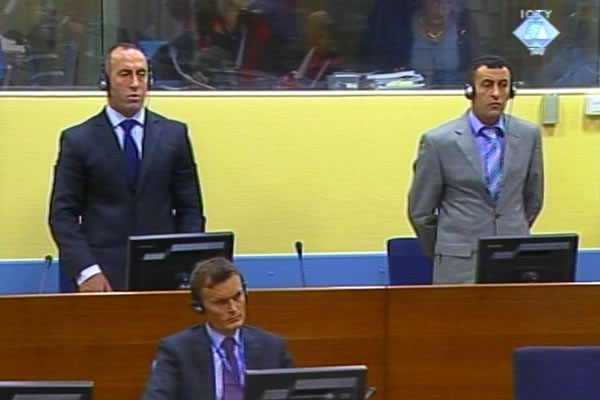 Ramush Haradinaj and Lahi Brahimaj in the courtroom
The Appeals Chamber with Judge Patrick Robinson presiding quashed the acquittal of the former KLA commanders, Ramush Haradinaj, Idriz Balaj and Lahi Brahimaj of the charges of murder, cruel treatment and unlawful detention of civilians in the KLA prison camp in Jablanica. In its judgment, the Appeals Chamber ordered a ‘partial re-trial’ on six of the counts in the indictment charging the three accused on the basis of personal criminal responsibility and for their participation in the joint criminal enterprise to commit crimes against the Albanian, Serb and Roma detainees in Jablanica.

The Appeals Chamber has reached its decision with a majority of votes. Presiding judge Robinson gave his separate and partially dissenting opinion.

The Appeals Chamber holds that the Trial Chamber “seriously erred” when it ordered the prosecution to rest its case despite the prosecutor’s request to examine two other witnesses, who had given statements to the OTP investigators in which they shared their knowledge of the direct participation of the accused in the crimes in Jablanica. The witnesses then refused to give evidence before the Tribunal, in fear for their lives. Today’s judgment went on to state that the Trial Chamber ‘did not get its priorities right’ ‘failing to “appreciate the gravity of the threat that witness intimidation posed to the trial’s integrity” from the beginning to the end.

The prosecutor’s request referred to a former KLA member, Shefqet Kabashi and the witness under the pseudonym 30. In two statements to the investigators, Kabashi said that Haradinaj was present when Balaj and Brahimaj beat up prisoners held in the prison camp Jablanica. Witness 30 described the same events from a prisoner’s point of view. Both witnesses refused to repeat their statements in the courtroom.

Apart from the events in Jablanica, the indictment against the three KLA commanders listed a series of other crimes perpetrated against the Albanian, Serb and Roma civilians in the Kosovo region of Dukagjin in 1998. The Trial Chamber acquitted Haradinaj and Balaj on all counts in the indictment, while Brahimaj was sentenced to six years in prison for torture and cruel treatment.

The prosecution’s ground of appeal to quash Balaj’s acquittal of the charges of aiding and abetting the murder of three women, rape and torture of a protected witness and cruel treatment of the witness’s husband was rejected The Appeals Chamber also rejected Brahimaj’s demand to reverse his conviction on the counts of torture and cruel treatment of protected witnesses under the pseudonyms 3 and 6. Brahimaj’s defense also called for a milder sentence, but the Appeals Chamber rejected the request, so that Brahimaj’s six-year sentence was allowed to stand.

Although Ramush Haradinaj had indicated he would not appear at the judgment hearing, he was in the courtroom today together with Lahi Brahimaj who was ordered to return from provisional release. The Appeals Chamber also unsealed the warrant for Haradinaj’s arrest order, issued two days ago. As for Idriz Balaj, he is in detention in Kosovo pending his transfer to The Hague. The UN Detention Unit manager was ordered to remand the three accused in custody until further notice.