DEFENSE EXPERT: BOSNIA AND HERZEGOVINA AND HERCEG BOSNA ARE ONE AND THE SAME THING

Croatian historian and independent presidential candidate Josip Jurcevic is giving evidence in the defense of General Slobodan Praljak. Jurcevic drafted an expert report focused among other things on the relationship between Croatia and BH from 1991 to 1995. In Jurcevic’s view, the names Bosnia and Herzegovina and Herceg Bosna have the same meaning and this is how the use of both names should be interpreted in the HVO documents 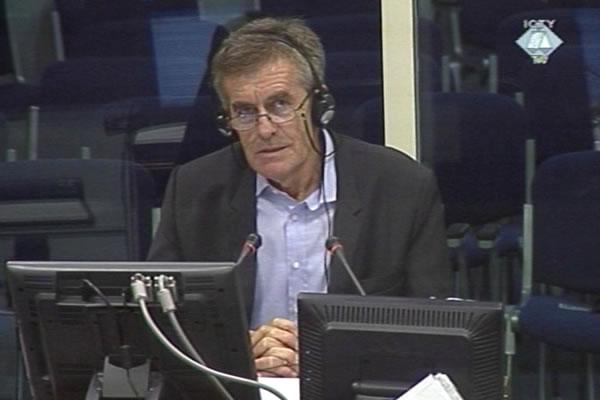 Josip Jurčević, svjedok odbrane Slobodana Praljka
The trial of the former Bosnian Croat leaders continues with the evidence of Croatian historian Josip Jurcevic. Jurcevic was asked by Slobodan Praljak’s defense to draft an expert analysis focused among other things on the relationship between the Republic of Croatia and BH from 1991 to 1995.

In his replies to questions put by Praljak’s lawyer Bozidar Kovacevic the witness highlighted the key findings in his analysis, which do not diverge from earlier arguments set forth by the defense: Croatia didn’t have any territorial aspirations towards BH, it supported BH’s independence. Herceg Bosna was not a ‘state within a state’ and Bosnian Croats fought only for their rights as a constituent people in BH.

Jurcevic among other things confirmed the argument proffered by the defense of the former Herceg Bosna leaders that the terms Bosnia and Herzegovina and Herceg Bosna had the same meaning and this is how it should be interpreted when it was used in various documents produced by the Croatian Community of Herceg Bosna. Jurcevic added that until the 90’s the term Bosnia was used as a shorthand term for the Republic of BH.

In the first half of 1992, Jurcevic worked in the Department of Information and Psychological Operations in the RH Ministry of Defense. Jurcevic’s superior was the accused Praljak, who served as an assistant defense minister in Gojko Susak’s ministry. Jurcevic currently works at the Institute of Social Sciences in Zagreb.

Jurcevic is also an independent candidate at the upcoming Croatian presidential elections. If elected president Jurcevic will be the second Croatian head of state to give evidence in The Hague. The current president Stjepan Mesic appeared as a witness three times before the Tribunal, always as a prosecution witness. Mesic testified twice as an ordinary politician, in 1998 at the trials of Tihomir Blaskic and Slavko Dokmanovic. In 2002, Mesic testified as the head of state in the case against Slobodan Milosevic.