As his cross-examination continues, the prosecutor brings up General Slobodan Praljak’s role in the ‘premature’ implementation of the Vance-Owen peace plan in January 1993, and in the ‘active defense’ of Gornji Vakuf 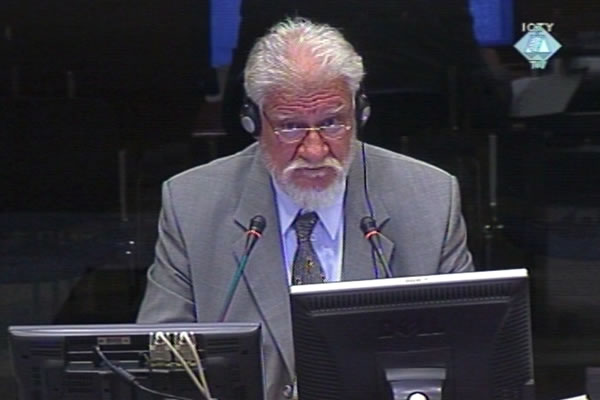 Slobodan Praljak svjedoči u svoju odbranu
As his cross-examination continued, the prosecutor put it to General Slobodan Praljak that the accused general did have the authority to command the HVO forces during the conflict with the BH Army in Gornji Vakuf in mid-January 1993, although at that time he did not hold any official ranks in the army. The prosecutor also put it to him that he knew about the shelling and burning of houses and the ethnic cleansing of the Muslims from the nearby villages.

Praljak denied those allegations, claiming that in mid-January 1993 he went to Gornji Vakuf at the request of Franjo Tudjman and Alija Izetbegovic, who were in Zagreb with international mediators Vance and Owen, discussing the details of a peace plan that envisaged cantons in BH. Praljak was present for a while at the talks. He claims the Bosnian president agreed to the resubordination of BH Army units to the HVO in the cantons that were supposed to go to Croats.

Convinced that an agreement had been reached, Praljak traveled to Mostar in the morning of 15 January, and then to Prozor and Gornji Vakuf. On the same day, the HVO president Jadranko Prlic, defense minister Bruno Stojic and chief of the HVO Main Staff Milivoj Petkovic issued orders demanding from the BH Army to resubordinate its units in the three Croat cantons to the HVO or to pull out from the areas.

Prosecution documents indicate that in the afternoon of 15 January, after Praljak’s departure, Izetbegovic again insisted at the talks in Zagreb that the Croats were misinterpreting parts of the agreement, warning that this might make the conflicts escalate in Gornji Vakuf, Mostar, Travnik… The prosecutor also brought up the minutes from the meeting where Lord David Owen says the debate was ‘useful but didn’t lead to a final solution’.

Noting that Praljak left Mostar to go to the Gornji Vakuf area, the prosecutor implied that after ‘the HVO ultimatum for the BH Army units in that town to either pull out or be resubordinated’, the conflicts in the town escalated. Praljak disagreed with the argument, claiming that the conflicts were caused by the BH Army which had dug the trenches all around the town a month before the fighting broke out, ‘surrounding’ the HVO. According to Praljak, it was ‘active defense’ and not ‘premature’ implementation of the Vance-Owen peace plan as the prosecution contends.

Although prosecution documents indicate that Praljak issued some instructions to the HVO commanders in Gornji Vakuf and ordered that artillery be brought to that area, Praljak denies having had any command role. He claims he was in Prozor throughout that time; he went to the HVO lines in the Gornji Vakuf area only once.

The prosecution will continue its cross-examination tomorrow.