Continuing the cross-examination, the prosecution showed the court an interview in Novi list newspapers in April 2004 where General Slobodan Praljak says hat ‘nothing bad happened’ in Stolac. Praljak added that he would ‘award a medal’ to whoever expelled the Muslim women and children from that town as that person saved them from the revenge at the hands of the Croatian refugees from Central Bosnia 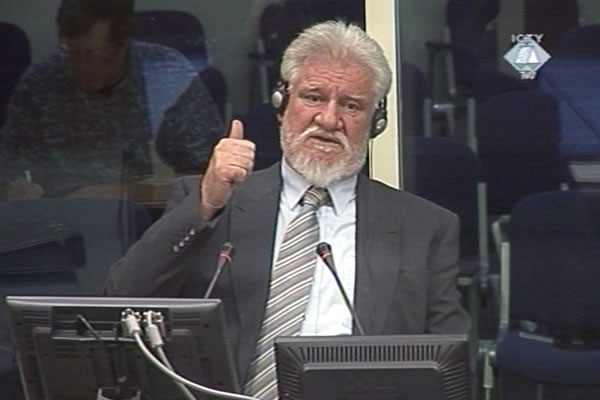 Slobodan Praljak svjedoči u svoju odbranu
As the cross-examination of General Slobodan Praljak continued, the prosecution noted that in Southeastern Herzegovina in July and August 1993 the HVO had disarmed and arrested a large number of Muslims and then moved them to prison camps in Heliodrom, Gabela, Dretelj, Ljubuski and other HVO prisons. There they were detained in inhumane conditions, suffered abuse and were taken to do forced labor along the frontlines.

The prosecution illustrated its allegations with an order issued by the chief of the HVO Main Staff Milivoj Petkovic on 30 June 1993 where he calls for the arrest of all Muslim members of the HVO. All men of military age, women and children are to be ‘isolated’. Praljak believes that Petkovic’s order was nothing but a response, justifiable in military terms, to ‘the treason’ by the Muslim soldiers in the HVO. ‘In normal circumstances those soldiers would have been shot’, the accused added.

The prosecution put it to Praljak that Muslims from Stolac, Capljina and Ljubuski had been expelled according to a plan which was to make place for the Croatian refugees from Central Bosnia. The prosecution mentioned an interview published in Novi list newspapers in April 2004, where Praljak says ‘nothing bad happened’ in Stolac, adding that he would ‘award a medal’ to whoever expelled the Muslim women and children from that town ‘because that person saved them from the revenge at the hands of the Croatian refugees from Central Bosnia’.

At the time when he gave that interview Praljak heard ‘from somebody’ that the HVO had been forced to do that because Croats from Central Bosnia wanted revenge, targeting the local Muslims. Praljak could not or would not tell who told him that. When prosecutor Douglas Stringer suggested that the expulsion was not the right solution for this problem, Praljak said ‘when you face a situation where you can prevent murder and rape you choose the lesser evil’.

Praljak contends he didn’t know about the arrests, adding that Petkovic didn’t tell him about the Muslims being arrested and detained in the HVO prisons when Praljak took over Petkovic’s duty as the commander of the HVO Main Staff on 24 July 1993. Praljak also claims that the other HVO commanders and Herceg Bosna officials including the then defense minister Bruno Stojic didn’t tell him anything about that.