The prosecutor today put it to General Slobodan Praljak that he was not interested in punishing the military police members who committed crimes because he only wanted to use them in combat. Praljak contends that ‘they fought well’ but then they wasted the credit earned on the battlefield by committing crimes against civilians of which he ‘was not aware’ 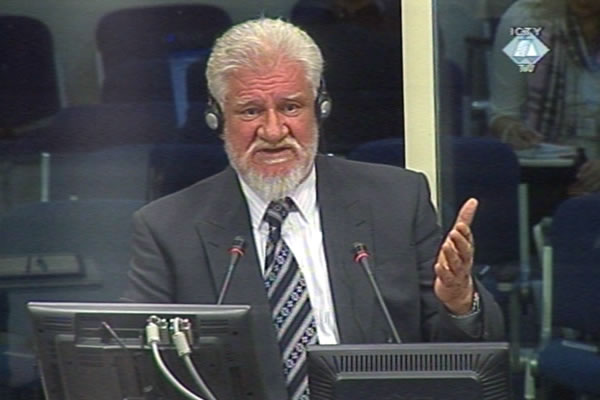 Slobodan Praljak svjedoči u svoju odbranu
As the cross-examination of General Praljak goes on, the prosecution implied that Praljak was not at all interested in punishing the perpetrators of crimes; he was interested in using them in combat operations. ‘You are making things up’, Praljak replied, saying ‘I never ever turned a blind eye to anything’.

Pointing to the responsibility of the Main Staff to protect the civilians in the HVO-controlled territory, the prosecution used a SIS report drafted on 15 July 1993. The document speaks about the crimes and abuse against the Muslims in Prozor. Praljak stated that in mid-July 1993 he was in Zagreb and that only the area where the front line extended was under the jurisdiction of the army. In Praljak’s view, the prosecution ‘is trying to invent new rules of warfare’ when it claims that it was possible to control the depth of the HVO territory.

The prosecutor then showed another SIS document about the situation in Prozor of 17 August 1993 when Praljak was the chief of the HVO Main Staff. That report, drafted by Luka Markesic, mentions rapes of Muslim women and other crimes committed by local HVO soldiers. One form of abuse they practiced was to force girls to serve Croatian soldiers naked, with their fathers watching. The report also says it was impossible to take any measures because a number of military police were among the perpetrators.

The prosecutor put it to Praljak that he was not interested in punishing the perpetrators because he needed them on the battlefield. Praljak claims that he ‘didn’t know’ about the crimes listed in Markesic’s report. When the prosecutor asked Praljak if the HVO military police was out of control in August 1993 in Prozor, Praljak answered that the ‘military police fought well’ but wasted the credit earned on the battlefield in the way described in the report. In Praljak’s opinion, the SIS was in charge of filing criminal reports against perpetrators of those crimes.

Judge Stefan Trechsel then asked Praljak how he thought the security services would do their job when he deployed them along the frontlines. Praljak explained that the perpetrators could be apprehended later, after the fighting ended. Today, in a similar situation, he would again deploy all available forces including the military police to win on the battlefield, Praljak said, explaining that a commander of an army was expected to do so.

Since Markesic’s report was addressed to the HZ HB Defense Department, headed at that time by Praljak’s co-defendant Bruno Stojic, the judges wanted to know if Praljak and Stojic ever discussed the issue. Praljak contends that they didn’t. Stojic’s defense claims the fact that a document was addressed to the Defense Department doesn’t mean that the department head knew about the contents.