When the prosecution showed an incriminating report drafted by HVO commander Jure Schmidt on 24 October 1992 in which Schmidt says that ‘Prozor and the Rama lake have been ethnically cleansed’, General Slobodan Praljak replied that Schmidt was not a HVO commander at all. According to Praljak, Schmidt was a German who couldn’t speak Croatian well and didn’t know the meaning of the term ‘ethnic cleansing’ 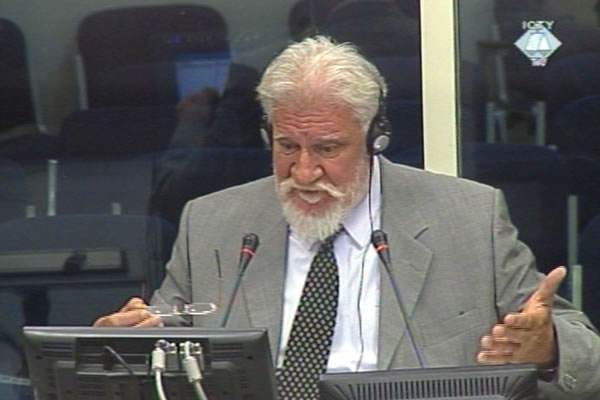 Slobodan Praljak svjedoči u svoju odbranu
Continuing its cross-examination, the prosecution noted that General Slobodan Praljak had the power to exercise command over the units in Herceg Bosna even before he took up the post of the chief of the HVO Main Staff on 24 July 1993. As the prosecution alleges, Praljak first did it in Prozor in late 1992, then later in Gornji Vakuf, Mostar and other places where there were clashes with the BH Army.

Prosecutor Douglas Stringer put it to Praljak that the HVO’s goal was to take over the political and military power in the municipalities in Herceg Bosna, noting that the conflict with the BH Army became inevitable once the Croats realized this goal could not be realized through peaceful means. Prosecutor Stringer gave Prozor as an example of a place where the HVO imposed its authority by establishing its municipal bodies and raising the Croatian flag on the police station building. This led to clashes with the BH Army soldiers in town.

‘None of that is true’, Praljak claimed, trying to convince the judges that the BH Army had been preparing for the attack against the HVO for days before. The prosecution went on to show a document dated 23 October in which the HVO Presidency insists that the Muslim civilian and military authorities should accept the HVO structure. The HVO structure implied the participation of Muslim representatives in numbers proportionate to their share in the population, Praljak said. In his opinion, this shows that Croats wanted a multi-ethnic state.

The prosecutor then brought up a report about the conditions in the Prozor municipality, sent one day after the conflict by HVO commander Jure Schmidt to Zeljko Siljeg, who commanded the Northwestern Herzegovina Operational Zone. ‘The town of Prozor and the Rama lake are under HVO control and both areas have been ethnically cleansed’, the document says. Praljak first said that he saw no connection between the two documents. However, the presiding judge then warned Praljak that he had better explain in greater detail what was written in the document as its contents were rather ‘incriminating’.

First Praljak said that Jure Schmidt was not a HVO commander as he is styled in the document, but a German who ‘spoke hardly any Croatian at all’ and ‘had no idea what ethnic cleansing is’. Praljak then concluded that Schmidt had actually copied another document, adding the term ethnic cleansing which he had made up himself.

As the cross-examination went on, Praljak tried to deny or diminish the importance of the prosecution allegations and the evidence of prosecution witnesses about the HVO attack on Prozor in October 1992, when houses were burned, property looted, and Muslims murdered and arrested en masse. At the same time, Praljak strove to present himself as a ‘peacemaker’ working to calm the situation after he came to Prozor around 27 December 1992 at the behest of Croatian president Franjo Tudjman.