General Slobodan Praljak contends that when he became the chief of the HVO Main Staff in July 1993 he had no knowledge that Muslim men had been arrested and detained in prison camps. Praljak denies that Mladen Naletilic Tuta’s Convicts’ Battalion was under the command of the HVO Main Staff 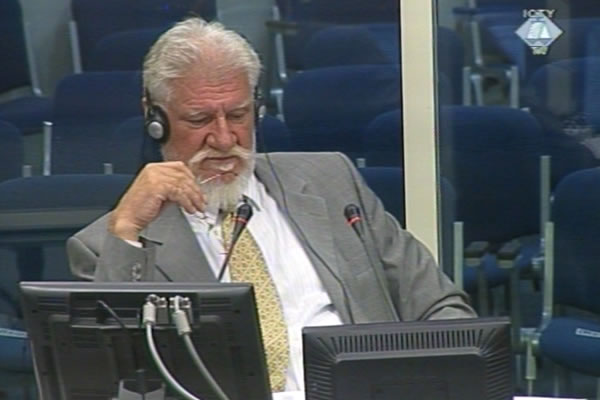 Slobodan Praljak svjedoči u svoju odbranu
As his cross-examination goes on, General Slobodan Praljak contends that he didn’t know anything about thousands of Muslim men who had been arrested and detained throughout Herceg Bosna in July 1993. In his reply to the prosecution, Praljak argued that when he took the post of chief of the HVO Main Staff on 24 July 1993, his predecessor, and another accused Milivoj Petkovic in this case, didn’t tell him about any arrests.

According to the prosecution evidence, in late June 1993 the HVO ordered the disarming and arrest of several thousand Muslim men who were taken to detention centers in Mostar, Ljubuski, Heliodrom, Dretelj and other places. They were detained in inhumane conditions, tortured and abused. Prosecution witnesses testified that some of them were killed or died in those prisons while many were injured or got killed on the frontlines were they were taken to do forced labor.

Despite the fact that he had repeatedly emphasized that the Muslim members of the HVO committed ‘treason’ on 30 July 1993, Praljak denied he had known anything about their arrest and detention. Praljak contends that the Main Staff had nothing to do with the HVO prisons. ‘Prisons were not in my job description’, Praljak said; according to him, he didn’t have to know about them in the first place. When the prosecutor asked if he meant to say that prisons were under the jurisdiction of the Defense Department headed by another accused, Bruno Stojic, Praljak replied, it ‘isn’t up to me to get involved’ in who was in charge of that.

At first Praljak avoided answering the prosecutor’s question, arguing that in 2002 he was ‘unprepared’ to give evidence and that ‘incomplete truth is not necessarily a lie’. When the judges joined in with their questions Praljak admitted that the Convicts’ Battalion ‘may have been part of the HVO structure in the widest sense’. Praljak however remained firm that Tuta was never under his or HVO command.

The prosecution continues the cross-examination tomorrow.