Praljak’s style of command, reflected in the suggestions he gave to subordinate HVO officers to ‘raze’ a town ‘to the ground’ or ‘sort out without mercy’ created an atmosphere among the HVO members where they felt free to either commit crimes or to tolerate them, the prosecution contends. Praljak denied the authenticity of the documents used by the prosecution, claiming that he was ‘framed by somebody’ 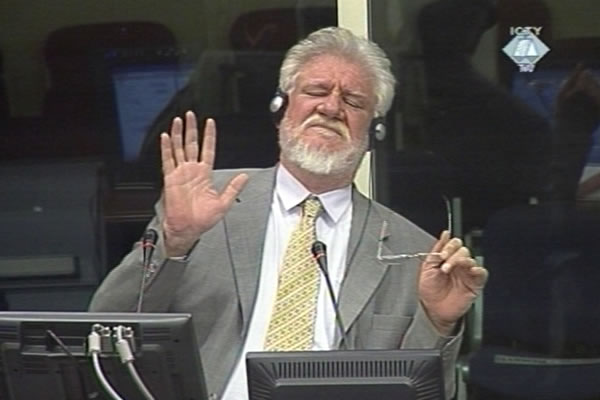 Slobodan Praljak svjedoči u svoju odbranu
Continuing its cross-examination of General Slobodan Praljak, the prosecution noted that the conduct of the accused and the style in which he issued orders had created a climate in which subordinate HVO officers felt free to either commit crimes against Muslim or to condone them during the conflict with the BH Army in 1993 and 1994.

The prosecution brought up Praljak’s order of 10 May 1993 to Zeljko Siljeg, commander of the Northwestern Herzegovina Operational Zone. Praljak gives him free rein to ‘do whatever occurs to him’ and ‘raze’ Jablanica ‘to the ground’. The prosecution has three versions of this document: one is hand-written and two are typed up on a typewriter and sent using packet radio communications.

Praljak is denying the authenticity of those documents, claiming that ‘somebody has framed’ him, and ‘planted’ the documents on the prosecution in one of the packages sent by the Croatian archive. According to Praljak, it could be anybody from any of the secret services that have colluded against him. Praljak’s lead counsel Bozidar Kovacic contends that the main problem with the documents lies in the fact that they bear no stamp of the Croatian Archive and it is ‘impossible’ to trace their origin.

This document, the prosecutor indicated, was obtained by the OTP in the same way as other documents from Croatian and HVO archives. As he noted, the documents bear the stamps of the HVO Main Staff and the reference numbers suggest that they are authentic. When Praljak argued that the hand-written version of the document was not written by him, the prosecutor replied that the accused could have dictated the document to somebody else.

The prosecutor then went on to show a document from 23 October 1993 in which Praljak ordered the situation in Vares to ‘be sorted out without showing mercy for anyone’ and ‘to find men who are up to the task and times’. This was forwarded down the chain of command to the HVO commander in Vares, Ivica Rajic. His soldiers committed a crime against the Muslims in Stupni Do. Praljak maintains that those words were meant only for his deputy Milivoj Petkovic; the reference was in fact to the Croats who were engaged in smuggling and were causing all kinds of problems among the HVO troops.

According to the prosecution, Praljak’s style of commanded is reflected in his orders to ‘raze’ something ‘to the ground’, or to ‘sort out without mercy’; this created an atmosphere in which subordinate officers and soldiers in the HVO felt free to either commit crimes and/or to tolerate them.