WHAT MADE PRALJAK SHIVER

As Slobodan Praljak's cross-examination continued, the prosecution spoke about the role of the accused in the breaking up the HOS; unlike the HVO, the HOS acknowledged the legitimacy of the BH government in Sarajevo. Arguing that the HOS implemented Ante Pavelic’s policies that made him shiver, Praljak denied having anything to do with the death of Blaz Kraljevic in August 1992. 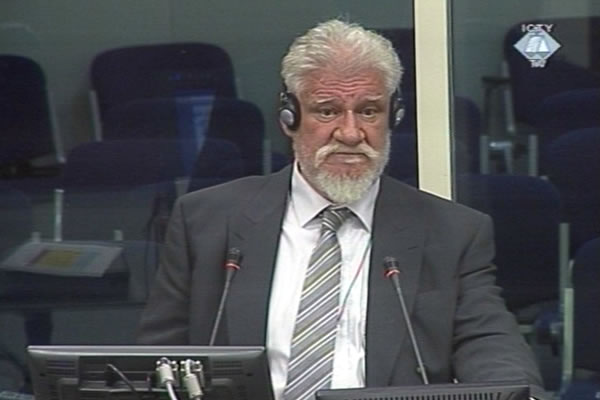 Slobodan Praljak svjedoči u svoju odbranu
As the cross-examination of the former Chief of the HVO Main Staff Slobodan Praljak continued, the prosecution implied that the ethnic cleansing of the Muslims had been a key instrument for securing the autonomy of the Croatian people in Herceg Bosna. ‘Sort of like you disposed of the Indians, you mean?’, the accused Praljak retorted to American prosecutor Douglas Stringer. When the judges warned him not to make such comments, the accused said that the HVO had treated Muslims as equals up until the point when ‘the spiral of war led to some terrible things’. According to Praljak, the BH Army is to blame for most of them.

The prosecution went on to imply that the HVO had dealt with all the military formations that acknowledged the legitimacy of the BH Government in Sarajevo, including the HOS which counted some Muslims in its ranks. Praljak however claimed the opposite, that the HOS favored the creation of a single state that would include both Croatian and BH territories. As Praljak put it, the HVO followed the concept ‘Bosnia and Herzegovina proposed by the European Community as an independent state consisting of cantons; three of the cantons were to have a Croatian majority’.

The prosecutor brought up the minutes from a meeting of the Croatian National Defense Council on 26 September 1992 when Praljak defended Ante Prkacin, one of HOS commanders, before Tudjman. Praljak explained to the Croatian president, who had wanted to take Prkacin’s military ID card away, that ‘he had personally together with others’ used Prkacin to break up the HOS. The prosecutor noted that HOS commander Blaz Kraljevic had been killed in an ambush near Mostar just month and a half before the meeting. Kraljevic’s death marked the end of the HOS whose members mostly joined the HVO.

Praljak denied having anything to do with Kraljevic’s death, adding that the investigation was never completed and it was therefore not clear if it was murder at all. Praljak’s lawyer Bozidar Kovacic noted that the defense had several documents with ‘at least 30 versions of how Kraljevic got killed’. The defense hadn’t used them before because the prosecution had never raised the issue.

The prosecutor noted that his primary intent was to show that Praljak had used one of the local commanders, Prkacin, to destroy the HOS because it supported the BH war Presidency. Praljak added that the HOS had implemented the policies of Ante Pavelic, and this made him shiver. Praljak called the HOS soldiers ‘blackguards’ who ran a concentration camp for Serbs in Dretelj; Praljak himself closed down the camp by force, he said.