When HZ HB president Mate Boban explained to Tudjman that Croats could have the majority in some Herceg Bosna municipalities through ‘cleansing’, he meant ‘ethnic cleansing’, the prosecutor says. According to Praljak, Boban merely used a word with ‘an unfortunate connotation’ 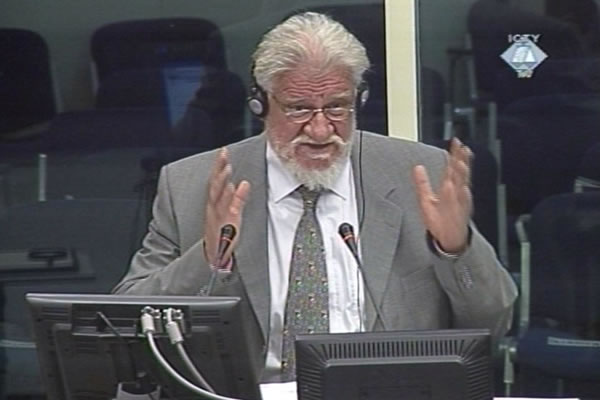 Slobodan Praljak svjedoči u svoju odbranu
When at a meeting with Franjo Tudjman on 27 December 1991 Mate Boban, HZ Herceg Bosna president, talked about ‘cleansing’ the municipalities in the border areas of Herceg Bosna to secure a Croatian majority, he meant the ‘ethnic cleansing’ of the Muslims there, the prosecutor claimed today.

Praljak on the other hand claims that the prosecutor has misinterpreted Boban’s words: Boban simply used a ‘word with an unfortunate connotation’. According to Praljak, Boban only wanted to show the Croatian president that it was possible to secure a Croatian majority in some municipalities by ‘redrawing their borders’. The Serbs and Muslims resorted to that procedure in the Former Yugoslavia to secure their majority in municipalities where Croats used to be in the majority, Praljak said.

At the same meeting Tudjman notes that there are only 17 percent of Croats in BH, warning that more of them might decide to leave. According to Tudjman, there was a real danger of the Croatian population completely vanishing in BH. After that, Tudjman concludes that the time has come to ‘draw the borders’ in BH. It is obvious that Tudjman means the annexation of parts of BH to Croatia, to fulfill his dream of recreating the Croatian Banovina, the prosecutor argued.

Contrary to that, Praljak believes that the Croatian president ‘obviously’ spoke ‘in the conditional’. ‘There is no reason preventing all Croats from living in one country if it’s on offer’, the accused added, not clarifying who if ever offered that to Tudjman. Praljak noted that even today he would prefer all Croats, including himself, to live in Croatia and not in BH. Those are nothing but ‘wishes’, Praljak said, yet no one can prohibit them.

The prosecutor put it to Praljak that Boban was Tudjman’s ‘puppet on a string’, implementing Tudjman’s policies in Herceg Bosna; everybody who thought differently was eliminated including the erstwhile president of the HDZ in BH, Stjepan Kljujic. Praljak disagreed, saying the prosecutor was off the mark, and used the opportunity to describe Kljujic as ‘a former sports journalist with a bow tie’ who was above all willing to appease Izetbegovic.