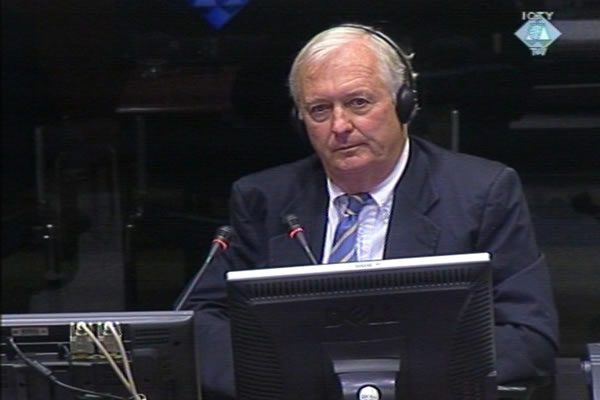 Shaun Byrnes, svjedok na suđenju Vlastimiru Đorđeviću
In coordinated actions in Kosovo in 1998, first the army would shell Albanian villages and the police would then enter, in effect playing the role of ‘military infantry’. This is how at the very end of his examination-in chief US diplomat Shaun Byrnes described the role of the MUP on Kosovo. In 1998 and 1999, when a number of crimes were committed against Kosovo Albanians, Vlastimir Djordjevic, as chief of the Public Security Department, was in charge of the police in Kosovo. Until 24 March 1999, when NATO launched its campaign, Byrnes headed the US part of the Kosovo Diplomatic Observer Mission (KDOM)

Later, between March and June 1999, the witness was in Macedonia and Albania where he heard the Kosovo refugees said that the Serb police, with the support of the paramilitaries, expelled them from their homes. Then they proceeded to take the refugees ‘like cattle’ to the train stations and loaded them on trains heading for Macedonia, or expelled them to Albania, Byrnes says.

In the cross-examination, the defense tried to downplay the role of the accused general in the MUP chain of command. Defense counsel Dragoljub Djordjevic implied that the accused didn’t have the power to decide independently on the deployment of the police in Kosovo, although he did sign an agreement about it with Byrnes in October 1998. The accused had to consult before signing the agreement and had to leave the negotiating room several times, the defense contends. Byrnes confirmed that Djordjevic indeed went out several times but could not say if Djordjevic had actually consulted somebody and who he may have consulted. Yet, Byrnes added, during the negotiations Djordjevic appeared to be in charge and didn’t consult anyone.

The defense took up Byrnes’s claims made yesterday that General Sreten Lukic, chief of the MUP Kosovo Staff, reported directly to the accused Djordjevic. According to the defense, in his evidence at the trial of six Serbian officials on the same charges – murder and deportation of Kosovo Albanians in 1999 – the witness claimed that Lukic had reported only to deputy minister Obrad Stevanovic. Byrnes stood by both of his previous claims, saying that Lukic reported to both Stevanovic and Djordjevic.

In an effort to discredit the witness and paint him as a person with close ties with the Albanian side, the defense read out parts of the statement made by former KLA leader Fatmir Limaj where he says that Byrnes regularly visited KLA units, was familiar with their structure, and had ‘a key role in the recognition of the role and objectives of the KLA’. Byrnes explained that by the end of 1998 it became clear that the KLA was increasingly enjoying the support of the people at the expense of Ibrahim Rugova’s peaceful option. That is why he advocated the argument that the KLA had to be part of any political agreement because it would be impossible to reach a peaceful solution without their involvement.