Former operations officer in the Pristina Corps and the 3rd Army, Milan Djakovic today confirmed that the entries in his notebook were indeed accurate; according to the notebook, the accused general Vlastimir Djordjevic regularly attended the meetings of the Joint Command in 1998. At the same time, however, the witness denied that the Joint Command ever existed, claiming it was just short-hand for ‘coordination meetings’ of the army and the police 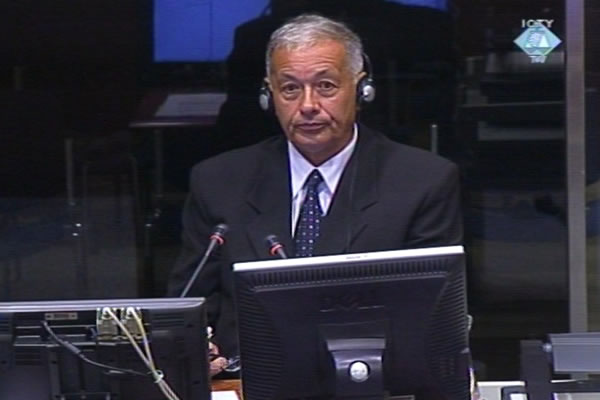 Milan Đaković, svjedok na suđenju Vlastimiru Đorđeviću
After a three-week summer recess, the trial of police general Vlastimir Djordjevic continued with the evidence of former chief of operations in the Pristina Corps and the 3rd Army, retired VJ general Milan Djakovic. Djakovic’s notebook from 1998, one of the prosecution’s key pieces of evidence proving the existence of the Joint Command of the Army and Police for Kosovo, was tendered into evidence today. According to the indictment, General Djordjevic, who was the chief of the Serbian MUP Public Security Department, participated in the activities of that body. The prosecution is trying to prove that the FRY president Slobodan Milosevic controlled the situation on Kosovo through this informal body, using it to ethnically cleanse the Albanian civilians in 1998 and 1999.

Djakovic had already testified in May 2008 at the Kosovo Six trial as a court witness. Then and today Djakovic denied that the Joint Command existed; this claim is contradicted by his notebook containing the minutes from more than 60 meetings of that body in Pristina from 21 July to 30 October 1998. The Joint Command was neither a formal nor an informal body, the witness contended. It was a name for the meetings where the activities of the army and the police were coordinated. The meetings were indeed attended by some high-ranking politicians such as Nikola Sainovic and Milomir Minic, the witness said, but the term Joint Command was coined in the summer of 1998 by him and Nebojsa Pavkovic, the Pristina Corps commander, who was the witness’s superior at the time: it ‘was easier’ for them to use the short-hand instead of the full name, ‘coordination meetings’.

According to Djakovic’s minutes, General Vlastimir Djordjevic regularly attended meetings of the Joint Command in 1998. Noting the active role of the accused in the Kosovo events, the prosecution presented several excerpts from the witness’s notebook speaking about the meetings in July and August 1998, where Djordjevic talks about deploying the ‘Thunderbolt’ police unit on Kosovo and the army reserve force draft implemented by the MUP in the province.

According to Djakovic’s notebook, at a meeting in early September 1998, General Djordjevic demanded that all Albanian civilians return to their houses ‘with the use of force’. In an effort to justify the ‘forcible humanitarian move’ on the part of the accused general, the witness said that the Albanians were fleeing into the woods because of the fighting; they were afraid to return even when the situation settled down. The fear was caused by a disinformation campaign claiming they would be killed or abused if they returned, the witness said. According to Djokovic, General Djordjevic demanded that the Albanians be forced to return to their homes, given that they were unwilling to do so even when they were ‘told nicely’ that nothing bad would happen to them if they returned. ‘You have to return because women and children cannot live in the woods’, Djakovic interpreted General Djordjevic's appeal to the Albanian refugees.

Tomorrow the witness will be cross-examined by Djordjevic’s defense counsel.