WITNESS: DJORDJEVIC KNEW WHAT POLICE DID IN KOSOVO 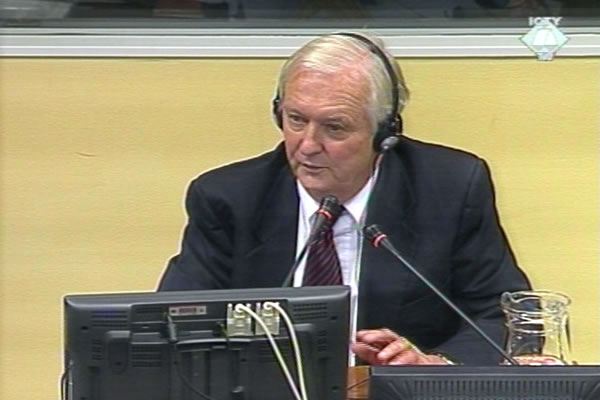 Shaun Byrnes, svjedok na suđenju Vlastimiru Đorđeviću
US diplomat Shaun Byrnes described the contacts he had with Serbian officials in 1998 and 1999 as the head of the US Kosovo Diplomatic Observer Mission (KDOM). The accused Vlastimir Djordjevic, who was the chief of the Serbian MUP Public Security Department at the time, was among the officials Byrnes met. In April 2007, Byrnes gave evidence about the same events at the trial of six Serbian officials charged, like Djordjevic, with murder and deportation of Kosovo Albanians during the NATO campaign in 1999.

During his stay in Kosovo Byrnes met most often with General Sreten Lukic, chief of the MUP Staff in the province. As Byrnes said, he told Lukic about ‘the unacceptable conduct’ of the Serbian police: burning houses, destroying property and expelling Kosovo Albanians. In most cases, Lukic either denied the police had done it or argued that they had done so in response to the KLA activities. As far as Byrnes knew, Lukic was Djordjevic’s subordinate and regularly reported to him on activities of the police in Kosovo.

Apart from his regular meetings with Lukic, in late October 1998 Byrnes met with Vlastimir Djordjevic. The negotiations resulted in the Byrnes-Djordjevic agreement on Serbian police operations on Kosovo. Djordjevic was the chief negotiator for the MUP, and according to Byrnes, ‘he was very well informed’ about the details of positions and movement of the police in Kosovo.

While he was in Kosovo, Byrnes saw that the regular police was used only to maintain security in towns. The special police units, often coming from Serbia, took part in combat on the orders of the chief of the Public Security Department. The heavily armed PJP acted as a ‘military unit’, the witness noted, adding that the heavy weapons they had – mortars, armored vehicles with light anti-aircraft cannons – was not standard police equipment.

Tomorrow the witness will be cross-examined by police general Vlastimir Djordjevic’s defense.