When a judge asked Praljak why the parents in Nova Gradiska, Croatia, protested, demanding the return of their children from the frontlines in BH, he replies that during the war, ‘everybody poked their nose into everything’ 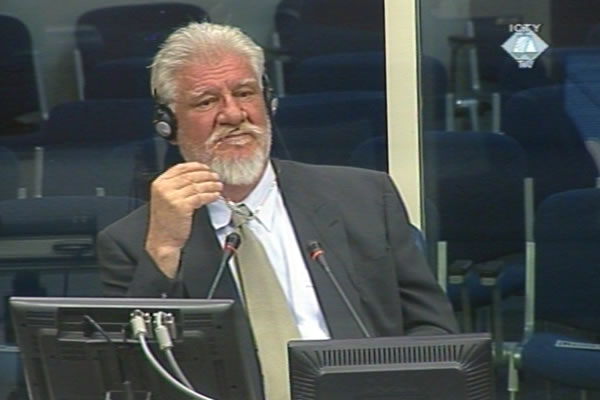 Slobodan Praljak svjedoči u svoju odbranu
As the cross-examination of General Slobodan Praljak continued, the prosecutor put it to him that the Republic of Croatia had been involved in the conflicts in BH but had ‘tried to hide it’ in the face of international pressure and threats of sanctions. Prosecutor Douglas Stringer corroborated his claims about Croatia’s involvement in the fighting in BH with the presidential transcripts in which Franjo Tudjman asks Gojko Susak and Janko Bobetko to get together with Praljak, Petkovic, Prlic and others in Herceg Bosna and make sure that the operations there are conducted ‘in a way that would not look like direct interference’.

Praljak’s response to those claims was to say that the great powers, such as the USA and UK sought ‘any pretext’ to equate Croats with Serbs in order to impose sanctions. According to him, they fabricated ‘their own truth’ about the HVO and used it to pressure Croatia. Tudjman appeased Izetbegovic and the international community to such an extent that in the end he turned the HVO into losers.

When the prosecutor put it to Praljak that Tudjman had sent him to BH to implement his policy, Praljak replied that he ‘implemented Croatian policy, not Tudjman’s’. ‘It was in fact my policy, parallel to the policy pursued by Croatia, Tudjman, Susak, Prlic, Stojic and all the others’. This policy was peaceful, he added, and all the HV troops fighting in BH were ‘volunteers’.

The prosecutor then brought up an HV document speaking about the protests by parents from Nova Gradiska, Croatia, who demanded the return of their children – members of the HV 5th Guards Brigade – from the Southern Theatre, in the south of Herceg Bosna. ‘Why would the parents be demanding the return of their children if they had gone to fight there voluntarily,’ Swiss judge Stefan Trechsel asked the accused.

During the war, Praljak replied, ‘everybody poked their nose into everything’, trying to convince the judges that the HV 5th Guards Brigade troops were volunteers who could have refused to go and fight in BH if they had wanted to. ‘Perhaps,’ he added, ‘their parents didn’t know that they had volunteered to fight there’, since the 5th Guards Brigade was a professional unit whose soldiers didn’t get to go home on leave that often.

The prosecutor brought up other documents showing HV presence in BH, claiming that Croatia sent substantial aid to the HVO during the war, not only in weapons and equipment but also in troops. ‘The BH Army was sent more,’ Praljak replied, confirming the prosecutor’s allegation that the HV soldiers who had come to fight in BH, including himself and other high ranking HVO officers, were on the Croatian Defense Ministry payroll. According to him, this was financed from the ‘shared funds’ transferred by the Herzegovinians working abroad.