‘TIGERS’ AND ‘THUNDERS’ IN HERCEG BOSNA

In an effort to prove the involvement of the HV in the armed conflict in BH, the prosecution continued its cross-examination of Slobodan Praljak, bringing up documents that corroborate the involvement of the Croatian forces in the clashes between the HVO and the BH Army. Praljak denied this allegation arguing that it was a case of ‘clumsy wording’ leading to ‘false conclusions’ 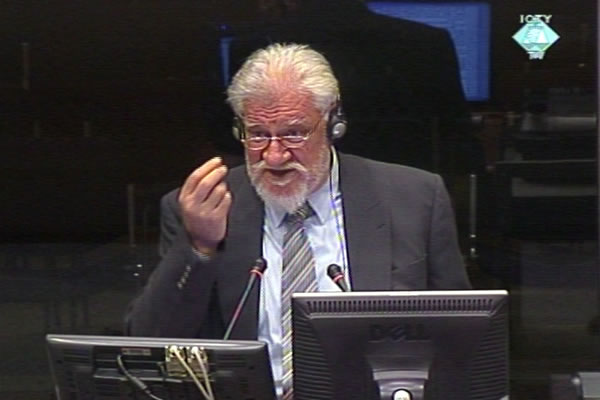 Slobodan Praljak svjedoči u svoju odbranu
As the cross-examination of General Slobodan Praljak continued, the prosecution noted that the HV units had taken part in HVO combat operations in the Herceg Bosna area during the conflict with the BH Army. According to the documents presented by the prosecution, the 1st Guards Brigade of the HV, nicknamed the Tigers, and the 2nd Guards Brigade, the Thunders, fought alongside the HVO in BH.

Praljak confirmed that about 100 soldiers from the two HV units had come to Herceg Bosna in response to his call. However, as he explained, they were then incorporated into the HVO because they were ‘volunteers’ who had decided freely to fight in another country. ‘I maintain this regardless of the clumsy wording in those documents which may make it look different’, Praljak said.

Prosecutor Stringer noted several instances of ‘clumsy wording’ in the documents drafted by the HV and the Ministry of Defense and in the so-called presidential transcripts. The report HV brigadier Ivan Kapular drafted for defense minister Gojko Susak states that members of the HV Fifth Guards Brigade fought under his command from 6 July to late November 1993 on the frontlines near Mostar, Gornji Vakuf and Prozor in three rotations. The first shift consisted of some 300 soldiers; there were about 700 soldiers in the second and third shift.

Praljak denied that it was true arguing that Kapular ‘massaged’ the report in order to gain ‘a bit of fame, money and equipment’. Praljak first said that no more than 250 ‘volunteers’ from Croatia had ever fought in Herceg Bosna at any given time. Then he went on to say he knew that in his evidence in the Naletilic case he had stated there were never more than 700 of them. He had subsequently given it some thought and concluded that there had actually never been more than 500 of them.

The prosecution showed a document drafted by the Welfare Administration in the Croatian Defense Ministry on 22 November 1993, instructing all the heads of welfare departments in Herceg Bosna how to fill in the place of death for those who got killed: they were supposed to write Southern Theatre, which also covered Croatia, instead of the exact place such as Mostar, Bugojno or any other place in BH. For the prosecution, it was ‘an attempt to cover up’ the fact that the HV troops had fought in another country.

Praljak tried to convince judges that this was all about the social welfare of the ‘volunteers’. If a soldier died in another country, his family would not be entitled to financial compensation and other benefits ‘because of red tape’.

The prosecution finally brought up the transcript from a meeting between Tudjman, Susak and Bobetko on 23 November 1993. At the meeting, the president got upset because the HVO Main Staff was mentioned by name in a document with the he Croatian Defense Ministry letterhead. Tudjman reminded Susak and Bobetko about a previous instruction about keeping up the appearances that Croatia was not involved in the conflict in BH.