In the cross-examination of Andras Riedlmayer, US expert on Ottoman cultural heritage, Vlastimir Djordjevic's defense counsel contested his conclusion that Kosovo mosques were destroyed ‘from the ground and not from the air’, arguing that it was based only on ‘common sense and not on technical expertise’ 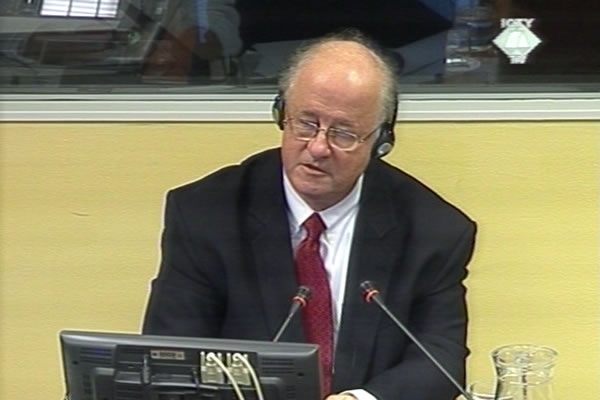 Andras Riedlmayer, svjedok na suđenju Vlastimiru Đorđević
In the cross-examination of Andras Riedlmayer, US expert on Ottoman cultural heritage in the Balkans, the defense of police general Vlastimir Djordjevic argued that the witness was biased in his expert report on the destruction of cultural heritage during the conflict in Kosovo. The indictment states that the systematic destruction of cultural monuments and religious facilities was part of a widespread campaign of persecution against the Albanians implemented by the Serbian forces.

According to the defense counsel, the witness’s bias was reflected in the fact that 80 percent of Riedlmayer’s report focused on Islamic cultural monuments; attacks on Orthodox and Catholic places of worship took up the rest. The witness said the claim was ‘unfair’ and explained that the report investigated the war period, when most of the damage was caused to Islamic facilities. The aim of the report, the witness added, was to establish ‘in good faith’ the factual situation in the field and not to collect evidence for the prosecution, as the defense implied.

Not only is Riedlmayer biased, the defense said, but he was also ‘incompetent’. According to the defense, the US expert on the Ottoman cultural heritage doesn’t have the technical expertise necessary to justify the findings in his report about the causes of the destruction and damage to 225 Kosovo mosques the witness had personally visited. Riedlmayer’s conclusion that mosques were torn down and destroyed ‘from the ground and not from the air’, the defense maintained, is based solely on ‘common sense’ and not on technical expertise.

To illustrate his claim, the defense counsel referred to a report by the FRY authorities which claims that the White Mosque in Suva Reka was destroyed ‘from the air’, in the NATO campaign, and not ‘from the ground’ as Riedlmayer concluded.
Riedlmayer nevertheless stuck to his conclusion, noting that the ‘same pattern of destruction’ – explosives planted at the base of the minaret – was used in Suva Reka, as in the majority of the cases. It was ‘clearly visible’ at the site where the mosque used to be that the rest of the damage was caused by an explosion inside the mosque, not by a bomb hitting it from the air, Riedlmayer added. Riedlmayer looked at the remains of the White Mosque, and in addition to that he talked to the local Albanians and representatives of Islamic Community in order to draft his report. They described to him how the mosque had been destroyed. Riedlmayer’s findings were corroborated by a report drafted by the investigation team sent by the European Commission.