PRALJAK ON PLANS FOR A ‘GREATER BH’

Today Praljak continued answering the prosecutor’s questions. He repeated his claim that Stjepan Mesic was a ‘liar and perjurer’. He went on to say that Alija Izetbegovic was Milosevic’s partner in the effort to divide BH. In Praljak’s words, Izetbegovic advocated the creation of ‘a Greater BH’ with Muslim majority 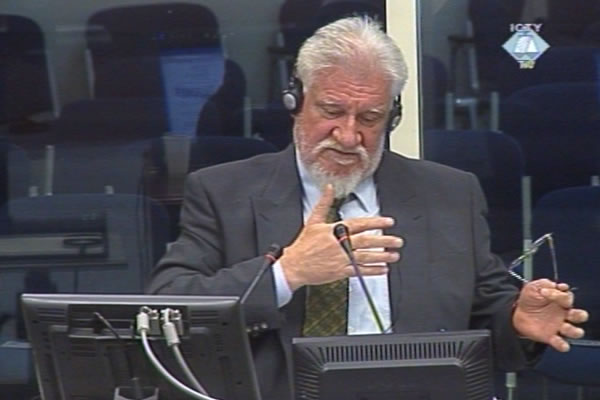 Slobodan Praljak svjedoči u svoju odbranu
Former commander of the HVO Main Staff Slobodan Praljak once again contended that the current Croatian president Stjepan Mesic ‘perjured himself and lied’ when in his evidence before the Tribunal on two occasions he argued that Tudjman and Milosevic had agreed to divide BH in Karadjordjevo in 1991.

Prosecutor Douglas Stringer quoted from Mesic’s evidence at the trial of Tihomir Blaskic, where Mesic said that in late March 1991 after meeting with the Serbian president in Karadjordjevo Tudjman bragged before his close associates that he had agreed to divide BH with Slobodan Milosevic. According to that plan, Croatia was to be given a part of BH coinciding with the Banovina borders of 1939. In his testimony at the trial of Slobodan Milosevic, Mesic maintained that Croatia was also supposed to get Cazin, Kladusa and Bihac, parts that Milosevic described as ‘Turkish Croatia’.

According to the prosecutor, Mesic said at the Blaskic trial that Croatia had publicly supported BH’s independence and at the same time it was keeping step with Milosevic by establishing Herceg Bosna, in an effort to weaken and divide BH. "Mesic lied for political reasons to denigrate President Tudjman as much as he could, and he’s so inferior to Tudjman’ Praljak said to counter the claims.

Praljak attributed another lie to Mesic, saying that Mesic misled Croatian public when he said on his arrival from The Hague that he had given evidence in Blaskic’s defense when in fact he had testified for the prosecution. Praljak used the opportunity to ask once again why Mesic waited so long to distance himself from Tudjman, if he disagreed with him as he claims.

The prosecution brought up what Tudjman had said in a presidential transcript: that the Croatian borders after the breakup of the former Yugoslavia were ‘absurd’. In Tudjman’s words, Izetbegovic was ‘aware of his powerlessness’ in the face of the plans for a Greater Serbia. The ‘solution was to dissolve BH’. Praljak countered the claim, saying that the transcripts ‘are misinterpreted’. The division of BH was discussed at meetings with Tudjman only in the context of ‘Izetbegovic’s possible decision to remain in Yugoslavia’.

When presiding judge Antonetti commented that he expected more precise answers and asked Praljak if Tudjman had a Greater Croatia on his mind, Praljak was completely flabbergasted. If there were any plans to divide BH, the country would not have lasted 24 hours, he said.

Praljak contends that Alija Izetbegovic was Milosevic’s partner in the effort to divide BH. Izetbegovic’s plan was put forth in the Islamic Declaration; the goal was to establish a Greater BH with a Muslim majority.