RE-EVALUATING THE ‘ETHICS’ OF PRLIC’S LAWYERS

After almost five months of absence, Jadranko Prlic appeared today at the trial of the former Bosnian Croat leaders to explain why he had been boycotting the trial. Following Praljak’s example, Prlic demanded to be allowed to examine witnesses and/or intervene when necessary in place of his lawyers from now on. His lawyers’ ethic is now being investigated by the Association of Defense Counsel practicing before the Tribunal 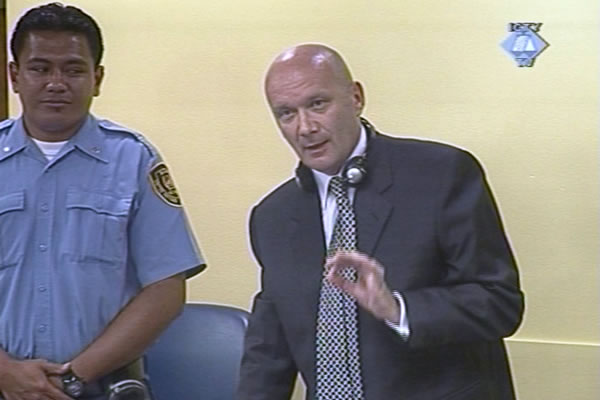 Jadranko Prlić u sudnici Tribunala
Former Herceg Bosna prime minister Jadranko Prlic appeared today unexpectedly at the trial of the former Bosnian Croat leaders, after almost five months of absence, to answer the judges’ comments about his decision not to attend his own trial. Like the accused Praljak, Prlic demanded that the Trial Chamber grant him the right to examine witnesses or to intervene when necessary instead of his lawyers.

As of 12 February 2009, Prlic has been boycotting the trial because he has ‘doubts about the fairness of the trial’. Presiding judge Jean-Claude Antonetti repeatedly expressed his concern over Prlic’s decision; at a hearing, the judge stated that it would be much more useful for the accused to be in the courtroom despite his belief that the trial was just a ‘farce’. Commenting on those words, Prlic today quoted late Serbian prime minister Zoran Djindjic, who said that ‘once you get on a wrong train every stop is wrong’.

Prlic explained he found it ‘unfair’ that the Trial Chamber rejected a series of motions filed by his defense, and went on to list some: the motion to sever the proceedings against him from those against the other five accused, the motion regarding annex of the statement Prlic had given to the OTP on 13 and 14 December 2001, tendered into evidence by the prosecution, the motion to admit into evidence a number of documents favoring his defense and finally, Prlic’s motion to be granted provisional release until the end of the trial.

Prlic also asked to be ‘the public face of his defense’ in the coming months: he wants to be granted permission to examine witnesses and intervene when necessary until the situation with his defense counsel Michael Karnavas and Suzana Tomanovic is resolved. Karnavas and Tomanovic’s ethics, it was disclosed today, is under investigation.

After one of previous hearings, there has been a harsh exchange in the courtroom between defence counsel Michael Karnavas and prosecutor Douglas Stringer. The Trial Chamber requested a public apology from both of them, and Karnavas and Stringer complied. In the meantime the Association of Defense Counsel practicing before the Tribunal was asked to give its opinion on the three questions the judges asked. As Karnavas noted, they have to do with ‘lack of professionalism, unethical conduct and misleading of the Trial Chamber’ on his part and part of his colleague Ms. Tomanovic. Karnavas asked ‘as a matter of principle’ that he and his colleague keep a low profile in the courtroom in the interest of his client until the Trial Chamber had ruled on the incident. The defence team even proposed an adjournment of the trial. Prlic however was against it, and the parties met in the middle: it was agreed that Prlic should assume some of the responsibility for his defense in the interim period; in other words it was agreed that Prlic’s defense should ‘be Praljakized’, as Judge Stefan Trechsel put it.

Prosecutor Kenneth Scott said that it would be best if Prlic’s defense drafted a written motion ‘to make everything clear’. After a consultation during the break, the Trial Chamber ordered Prlic’s defense to deliver its motion in writing by Wednesday. The other defense teams and the prosecution will be given until next Monday to respond.