SACIRBEGOVIC: BELGRADE'S KNOWLEDGE AND ROLE IN CRIMES IN BH

Former BH ambassador to the UN Muhamed Sacirbegovic contends that Belgrade knew of the crimes in BH. The FRY, Sacirbegovic said, ‘was involved in the conflict’: it sent its ‘military and paramilitary troops to BH and provided them with equipment and materiel so that they would launch attacks against civilians’ 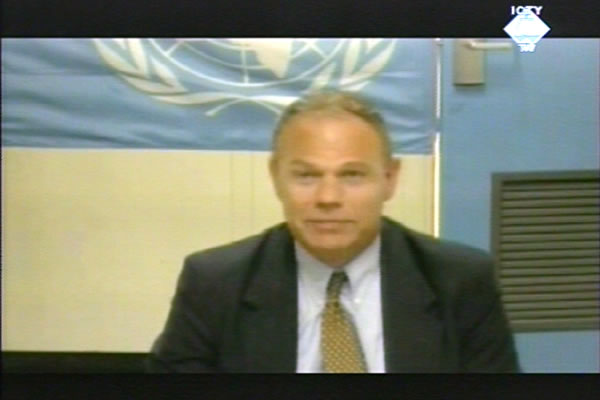 Muhamed Šaćirbegović svjedoči video linkom na suđenju Momčilu Perišiću
Through the evidence of former BH ambassador to the UN Muhamed Sacirbey (Sacirbegovic), the prosecution wants to prove that the FRY representatives and former chief of the VJ General Staff Momcilo Perisic did receive reports about the crimes of the VRS troops in BH from 1992 to 1995. In his evidence Sacirbegovic also said that the FRY ‘was involved in the conflict in BH’: it sent its ‘military and paramilitary troops and provided them with equipment and materiel so that they would launch attacks against civilians’.

General Perisic is charged with providing personnel, material, logistic and other support to the Bosnian Serb troops; the prosecution alleges that he significantly contributed to their crimes in Sarajevo and Srebrenica.

Sacirbegovic gave evidence via video link from the USA in the presence of a lawyer. The witness has been subjected to extradition proceedings in the United States in connection with an allegation of abuse of office that was alleged in Bosnia-Herzegovina.

From 22 May 1992, when Sacirbegovic was appointed ambassador to the UN, there were representatives from Belgrade sitting in that body who learned about the crimes in BH in various ways: through the UN Security Council resolutions, official notes sent to the Security Council, through conversations with their Bosnian colleagues or through the extensive coverage of the civilians’ plight in the media.

In Sacirbegovic’s words, he ‘was persistent’ in sending diplomatic letters describing the ‘humanitarian situation in the field, problems civilians faced, highlighting the disruptions in supply of food and medicines, the bringing in of military equipment from Serbia and Montenegro and border violations’. The witness claims that he sent ‘up to 200 letters a year’ because he ‘wanted all victims to be registered and not forgotten’. It was important to let the world know that ‘not only the territorial integrity and sovereignty of BH were violated but there were serious violations of international law’, that the witness described as, ‘genocide’.

Through Sacirbegovic, the prosecution tendered into evidence a series of the UN Security Council resolutions, including Resolution No. 752 on the withdrawal of the JNA from BH and Croatia; the witness claims Belgrade failed to comply with it. The BH Government, Sacirbegovic noted, believed that the JNA would be ‘a neutral force which would try to neutralize the actions of paramilitary units’. Soon it became clear that the JNA was in fact ‘taking actions and harming the population’.

The evidence of the former BH foreign minister and BH ambassador to the UN will continue tomorrow and is expected to last until the end of the week.