VIDEO RECONSTRUCTION OF THE SREBRENICA MASSACRE

At the trial of General Momcilo Perisic, former OTP military analyst Richard Butler continues his evidence. Today the prosecution showed a number of videos in an effort to reconstruct the Srebrenica massacre in all its stages 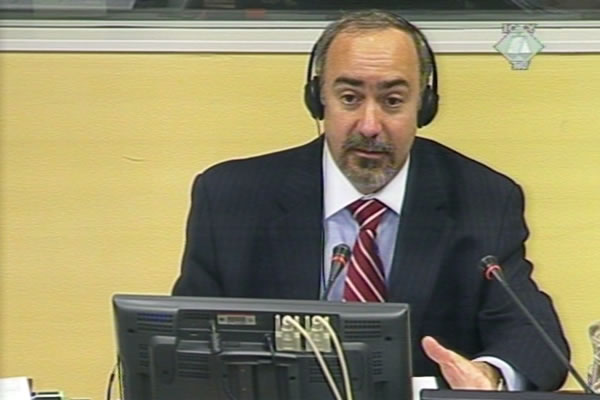 Richard Butler, svjedok na suđenju Momčilu Perišiću
For the most part, the evidence by former OTP military analyst Richard Butler at the trial of former chief of the VJ General Staff Momcilo Perisic proceeded with the prosecution tendering into evidence hours of video footage of what had happened in the Srebrenica enclave immediately before and after Mladic’s troops entered it on 11 July 1995.

The first video clips shown in the court today depict the atmosphere in Srebrenica on 10 July 1995, on the day before the fall of the enclave. The next video showed the events of the 11th, when Mladic, accompanied by the officers from the VRS Main Staff, identified by Butler, passed through deserted Srebrenica. A video reconstruction of the Srebrenica crime base continued with the footage showing Mladic meeting with Ton Karremans, UN Dutch Battalion commander, at the Fontana hotel on 11 July 1995, and a recording of two meetings with the distraught representatives of Srebrenica refugees. The VRS commander ‘generously’ offered them to choose: ‘to survive or cease to exist’.

In addition to the footage taken by VRS and the Serbian radio television cameramen, Butler commented on the video recording taken by Belgrade journalist Zoran Petrovic Pirocanac broadcast by Studio B channel immediately after the massacre in Srebrenica. Pirocanac moved together with Ljubomir Borovcanin, who commanded the special police units in the Srebrenica operation. He was able to record every location where Borovcanin was: Potocari and other places where men were separated from women, children and the elderly, locations where prisoners were gathered before they were transferred to places where they were detained and then executed. Pirocanac also recorded detainees in the so-called white house near the UN base in Potocari and their personal belongings which were thrown on a pile and later burned. According to Butler, the VRS realized they were ‘hazardous waste’.

The prosecution showed the video of buses and trucks used to deport Muslim women and children from Potocari to Tuzla and footage of refugees getting off a bus in the village of Luke and their departure to the free territory controlled by the BH Army.

Richard Butler’s examination-in chief concluded with the admission into evidence of a series of transcripts of intercepted conversations between the highest ranking VRS officers. In those transcripts the VRS officers discuss the execution of prisoners in the primary schools in the villages of Orahovac, Petkovci, Rocevic and Pilici, using codes. They also talk about supplying fuel for their transfer and burial into primary mass graves. The mass graves were then dug out and the victims’ remains were transferred to the so-called secondary graves at secret locations.

Executions and burial sites of the Srebrenica victims are listed in the annex to the indictment against General Perisic. As the chief of the VJ General Staff, Perisic is charged with providing personnel, material, logistic and other support to the Bosnian Serb army. The prosecution alleges he thus contributed to the murder of more than 7,000 Muslim men and boys and the deportation of up to 25,000 women and children from Srebrenica.