DIFFERENCE BETWEEN DIPLOMACY AND SITUATION IN THE FIELD

Former UNPROFOR spokesman Michael Williams used Slobodan Milosevic as an example to show the difference between ‘diplomacy and the situation in the field’. Milosevic publicly advocated peace but at the same time secretly provided ‘substantial logistic support to Bosnian Serbs’, the witness contends 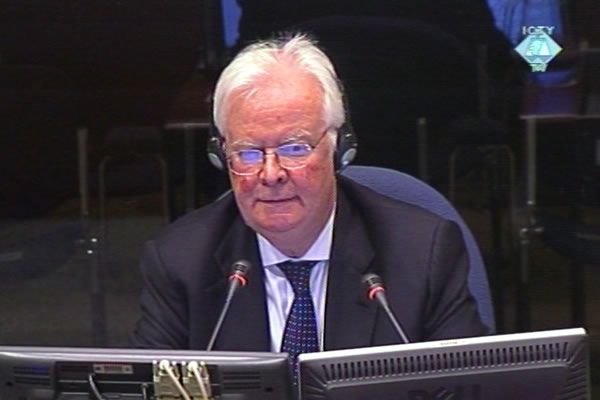 Michael Williams, svjedok na suđenju Momčilu Perišiću
Michael Williams, former head of the UNPROFOR Public Information Section in Zagreb, took the stand today at the trial of former chief of the VJ General Staff Momcilo Perisic, He testified about the events in Bosnia and Herzegovina at the trial of Slobodan Milosevic, and today the prosecution tendered into evidence the statement and transcripts of his testimony at that trial.

In the summary read by the prosecution, Williams states that from January 1994 to April 1995 he accompanied the UN special envoy Yasushi Akashi at the talks with Radovan Karadzic and Ratko Mladic, the FRY leadership and Slobodan Milosevic. Williams described their relationship, noting that Republika Srpska depended on ‘financial, material and technical support and other forms of assistance provided by FRY’.

In his reply to French judge Michele Picard, Williams explained that ‘Milosevic was kept informed about everything that was going on in Bosnia’. He ‘kept saying he wanted peace’. However, the Bosnian Serb army, the witness added, ‘received substantial logistic support from FRY’ and their resources increased in 1994 and 1995. This was the period when General Perisic served as the chief of the VJ General Staff. He is now on trial for providing personnel, material and logistic support to the VRS. The prosecution alleges he contributed substantially to the crimes in Sarajevo and Srebrenica.

In his cross-examination Williams partially confirmed the defense argument that Milosevic ‘tried to pressure Bosnian Serbs and make them participate in the peace process’. Williams said that ‘that was an impression Milosevic gave’, adding that ‘there is a difference between diplomacy and the situation in the field’.

At the Slobodan Milosevic trial, the witness claimed that the helicopters constantly flew over Republika Srpska while BH was a no-fly zone. This prompted the defense counsel to show the witness a report issued by the FRY authorities on 11 April 1995. The report stated that there had been only six flights, not 26 flights as UNPROFOR claimed; the purpose of the flights was ‘to evacuate the wounded’. The document allowed the possibility that ‘the helicopters belonged to Bosnian Muslims flying from Central Bosnia to Srebrenica and Zepa’. The witness replied that there was no ‘air lift with the enclaves’ which were ‘small areas where it would be impossible to fly unnoticed’. As Williams put it, the clarification offered by the FRY authorities was ‘unconvincing’.

The trial of General Perisic continues on Monday.