POSSIBLE IN PRACTICE BUT NOT UNDER LAW 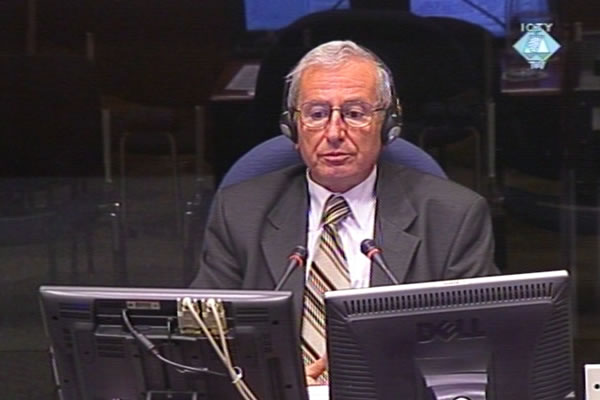 Miodrag Starčević, svjedok na suđenju Momčilu Perišiću
In his testimony at the trial of General Momcilo Perisic, former chief of the legal department in the VJ General Staff Miodrag Starcevic noted that there ‘is no legal basis’ for the Yugoslav officers to be assigned to military units of some other country. In Starcevic’s words, the request the SVK Main Staff sent to the VJ General Staff to transfer specific officers to its aviation units was ‘rather unusual’.

Starcevic said today that, pursuant to the rules on the implementation of international law of war in the FRY armed forces, a superior officer ‘was obliged to initiate the proceedings before the military prosecution and prevent further violations of international law of war as soon as he learned that any of his subordinates perpetrated crimes’. As the witness put it, if a superior officer didn’t institute proceedings to establish the responsibility he would have to be held responsible himself as a co-perpetrator or instigator.

The prosecution contends that General Perisic had the ‘authority, responsibility and actual ability to implement disciplinary mechanisms’ to prevent and punish crimes perpetrated by his subordinates who were sent through the 30th and 40th Personnel Centers to BH and Croatia. Instead, the indictment alleges, Perisic promoted many officers of the SVK and the RSK to higher ranks after the crimes they had committed became known. The promotion was denied only to General Milan Celeketic but it was only because Perisic held Celeketic responsible of losing ‘the Serb territories’ in Western Slavonia and not because Celeketic ordered the shelling of Zagreb in May 1995.

Miodrag Starcevic will continue his evidence in May; on Monday the prosecution will call its next witness.