'HORROR MOVIE' IN THE VILLAGE OF CUSKA

Describing the men who massacred about 40 Albanians in the village of Cuska Tahir Kelmendi -who eye witnessed the incident – said at the trial of general Vlastimir Djordjevic that they wore blue, green and camouflage uniforms. Because they wore black bandanas and had painted faces the witness compared them with ninjas and ‘men from horror movies’ 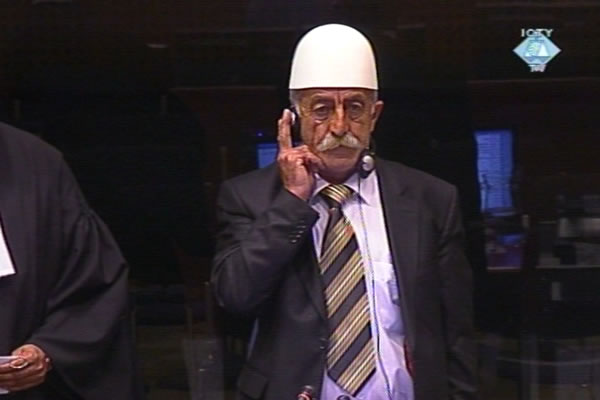 Tahir Kelmendi, svjedok na suđenju Vlastimiru Đorđeviću
Yesterday, the court heard the evidence of Hazir Berisha, a survivor of the massacre of about 40 Kosovo Albanians in the village of Cuska near Pec. Today at the trial of police general Vlastimir Djordjevic the prosecution called the witness who saw this incident, Tahir Kelmendi. On 14 May 1999, Kelmendi hid behind one of the houses of the Gashi family in which the crime took place and watched what went on after the army and the police entered the village.

Civilians who gathered in the center of Cuska were ordered to empty their pockets and put gold, money and personal documents in front of them, Kelmendi recounted. Men were then separated from women and children and divided into three groups. The three groups were ushered into three houses of the Gashi family estate where the witness was hiding. Soon, the witness said, he heard shots and saw smoke and fire rising from the houses.

Hazir Berisha, who survived the massacre, said in his evidence yesterday that the police officers first shot the men in the house and then threw in an incendiary device which set the house on fire. Kelmendi said he saw Berisha jump out of the house; he had a ‘broken leg and his body was burned’. The witness was unable to help him because Berisha disappeared into a wheat field.

Describing the men who had entered the village of Cuska on 14 May 1999 and committed the massacre, the witness said that they wore blue, green and camouflage uniforms; some of them wore black bandanas and had their faces painted leading the witness to compare them to ninjas and ‘people from horror movies’. When the ‘ninjas’ left the village, the witness and some of his neighbors removed the bodies from the burned houses and hid them because they feared that the police might return and take the bodies away in an attempt to cover up the crime. A few days later, the witness and his neighbors buried the bodies of the men who had been shot and burned, including eight of the witness’s relatives in a single large grave.

Kelmendi maintained that the women and children who had gathered in the center of the village were ordered to form a convoy and were directed to the Albanian border. As the witness said, he saw similar refugee columns regularly near Pec during the NATO campaign in 1999. As the hearing today drew to a close, the defense counsel of the former chief of the Serbian MUP Public Security Department, Vlastimir Djordjevic, began his cross-examination which will continue tomorrow.

Spanish DNA expert Antonio Alonso testified today before Kelmendi took the stand. Alonso takes the credit for the identification of some of the remains of the Berisha family members killed in Suva Reka on 26 March 1999. After they were exhumed from a mass grave in Batajnica and after a preliminary analysis at the Forensic Medicine Institute in Belgrade, their remains were transferred to the National Institute for Toxicology and Forensic Science in Madrid, headed by Alonso. A DNA analysis was conducted there showing that 21 of the 41 remains belonged to a group that consisted mostly of women and children, killed in a pizzeria in Suva Reka.