WITNESS: I SURVIVED EXECUTION AND FIRE BY 'GOD'S WILL'

Hazir Berisha, one of the three survivors of the massacre of some 40 Albanian men in the village of Cuska, has described in his evidence at the trial of General Vlastimir Djordjevic how, despite being seriously injured, he had managed to escape a burning house 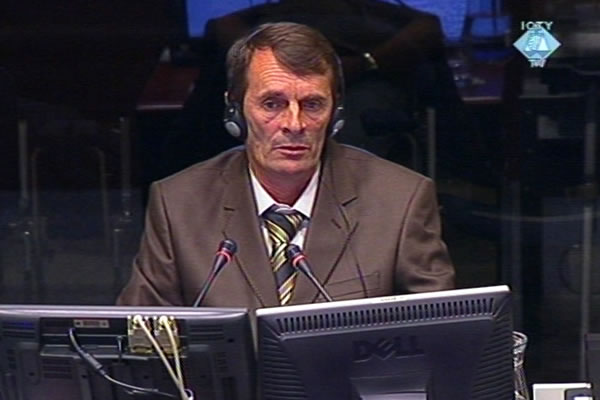 Hazir Berisha, svjedok na suđenju Vlastimiru Đorđeviću
Although the indictment against the former chief of the Serbian MUP Public Security Department Vlastimir Djordjevic for Kosovo crimes does not mention the murder of about 40 Kosovo Albanians in the village of Cuska near Pec in May 1999, the prosecution called Hazir Berisha, one of the three men who survived that massacre, to give evidence today. The prosecution decided to do so to indicate the pattern of conduct which, as alleged in the indictment, included various acts of violence against the Albanian population. The goal was to expel them from Kosovo. Unlike most of the witnesses at the trial of General Djordjevic who had previously given evidence in the cases of Milosevic and Milutinovic et al., Berisha is testifying for the first time. Today the statement Berisha gave to the OTP investigators in May 2008 was tendered into evidence.

There were rumors in the village, the witness said, that the Serbian army and the police had been burning and looting Albanian villages near Pec from the time the NATO air campaign started. In the witness’s words, in mid-April the Serbian forces entered his village and set several houses on fire. A group of uniformed Serbs returned to the village of Cuska on 14 May 1999. Fearing that as a man of military age he might be a target, Berisha fled his house and joined a group of 40 to 50 men and 250 women and children that had gathered in the center of the village.

The men were soon separated from other civilians and divided into three groups of 12 to 15 men each. The witness and his group were ordered to enter Sahit Gashi’s house. Fire was opened at them from automatic weapons. Everybody was killed except Berisha; he was seriously wounded. Bullets broke his right leg on eight places, the witness said. When the firing stopped, the witness remained still. Just as he decided to finally leave the house, the witness realized that five soldiers and police officers had returned to the crime scene.

As the witness recounted, they threw some kind of a can into the room where he was and the whole house caught fire. ‘My face was on fire and I didn’t know where I was, if I was on the floor or I was floating’, Berisha described. He managed to reach a window, leaped out and crawled to a safer place. Until the arrival of the NATO troops he tended to his wounds on his own, Berisha said. In mid-June he was admitted to the Pec hospital where he received medical treatment. Berisha still has a limp in the right leg and has to use the crutches.

On the photos the prosecution showed him Berisha was able to identify several Serbian police officers who, as Berisha contends, took part in the crime in Cuska. Murders and other crimes were ordered by Srecko Popovic and Nebojsa Minic, the witness noted, maintaining that he also saw a police officer by the name of Salipur at the scene.

The witness was asked if he knew what happened to the other two groups of Albanian men. They met the same fate, he said: they were taken to two houses where they were first shot and then set on fire. ‘Forty one men were killed in total, but God wanted one from each group to survive’, Berisha concluded his evidence.