In his evidence at the trial of General Vlastimir Djordjevic, Mehmet Mazrekaj, teacher from the Decani area, maintained that the police officers first expelled all Albanians from the village of Drenovac under the pretext of protecting them from the NATO air strikes. The police then found them in places where they had tried to seek shelter and ‘escorted’ them to the Albanian border 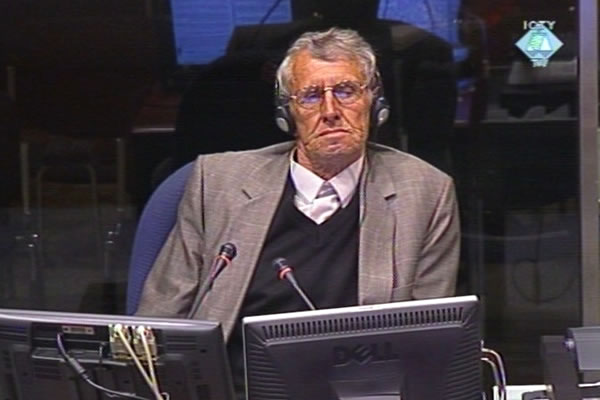 Mehmet Mazrekaj, svjedok na suđenju Vlastimiru Đorđeviću
Mehmet Mazrekaj, teacher from the village of Drenovac near Decani, described at the trial of General Vlastimir Djordjevic how he, his family and a large group of Albanians were forced to leave their homes and go to Albania in late March 1999. According to the statement Mazrekaj gave in 2000 and the transcript of his evidence at the Kosovo Six trial, admitted into evidence today, the Serbian police was the main culprit for the deportations in the Decani area. At that time the accused Djordjevic was chief of the Public Security Department of the Serbian MUP. He now faces charges of murder, forcible transfer and persecution of Kosovo Albanians in the first half of 1999.

Although NATO forces didn’t target the area, on 27 March 1999 the Serbian police entered the village and ordered the villagers to leave their houses because of the danger of air strikes. All the Albanians from Drenovac moved to a nearby village of Beleg. However, the witness recounted, the police ‘paid them a visit’ there, separated the men from the women and children and forced them to go towards the Albanian border. At one point, the witness managed to get out of the ‘male column’ to join his family. The witness found his family in the village of Istinic; they remained there for a few days until the shelling began from the hills around the village. The police once again entered the village, the witness said. The villagers were ordered again to head towards Albania and they finally did it. The witness and his family returned to the village of Drenovac in July 1999 when the Serbian security forces withdrew from Kosovo.

In his cross-examination, General Djordjevic’s defense counsel brought up the discrepancies between the witness’s earlier statements and testimony and his evidence today. The witness had never before mentioned the police entering the village of Istinic. Mazrekaj remained adamant that the chief of Decani SUP personally expelled Albanians from that village. The defense counsel then commented that in his statement to the OTP the witness had said the police had convinced them to stay in the village of Drenovac after the start of the NATO campaign because it was the safest place, the witness replied that the ‘local’ police officers from the village had told them that. Soon after, however, the witness maintained, other policemen came from Decani and ordered them to ‘get out of there because of the air strikes’.

Another Kosovo Albanian from Pec, Edison Zatriqi, took the stand before Mazrekaj. He had a transport business, Flamengo Tours, in Pec before the conflict. A day before the NATO campaign was launched, the police confiscated three buses he used for passenger transport. Some days later, on 27 March 1999, he and his family were forced to leave their homes and go to Albania in a long refugee column. En route, the witness was able to recognize one of his buses. All the passengers were Albanian except for the driver who wore a blue camouflage uniform.