At the trial of General Vlastimir Djordjevic the prosecution case continues with evidence about crimes against Kosovo Albanians in the Kacanik municipality in the spring of 1999. Sejdi Lami testified about the expulsion and killings in the village of Vata, while Isa Raka described how he lost his wife and their unborn child 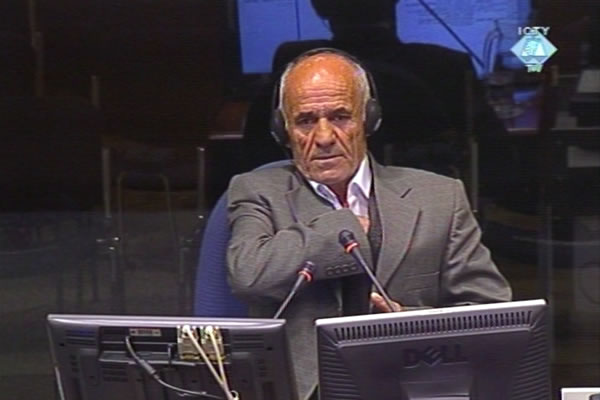 Sejdi Lami, svjedok na suđenju Vlastimiru Đorđeviću
As the prosecution case continues at the trial of former chief of Serbian MUP Public Security Department Vlastimir Djordjevic, charged with crimes against Kosovo Albanians in the first half of 1999, the prosecution called witnesses Sejdi Lama and Isa Raka. Lama and Raka appear for the third time before the Tribunal as they already gave evidence at the trials of Slobodan Milosevic and the Kosovo Six; the latter are former Serbian officials accused more or less for same crimes as Djordjevic.

Describing the attack of the Serbian security forces on the village of Vata in the Kacanik municipality, Sejdi Lami said that on 13 April 1999 shelling began from the nearby hills. This prompted the villagers to flee into the forest. When they briefly returned to the village they found the bodies of 11 men in different places. In fear for their lives, all the villagers headed towards Macedonia in next two days. Before he and his family crossed the border, some Serbian soldiers ordered them to give up all the money they had, Lami recounted. Lami returned to Kosovo in July 1999 and found his family house looted.

[IMAGE]4063[/IMAGE]The second witness today, Isa Raka, fled to Macedonia from Kosovo in late March 1999 when the army and the police attacked the part of Kacanik where he lived. On 27 March 1999, the witness claimed, he saw 20 to 30 policemen and two military officers taking up positions in the lime factory close to his house. Soon afterwards, there was random fire on the town; the witness’s pregnant wife was injured. The next day, Isa Raka and his wounded wife were in a large group of people that left from Kacanik for Macedonia. Raka’s wife was given aid by the people in the refugee column and later received medical treatment in the Skopje hospital, but she died of blood loss. Before her death, the doctors had to remove her unborn child who could not be saved.

Although he characterized Sejdi Lama’s evidence as ‘the most sincere of all prosecution witness up to now’ defense counsel Veljko Djurdjic insisted that Lami was not an eyewitness to the killing of 11 Albanians whose bodies were found in the village of Vata. As at two previous trials, the witness accepted this without demur. In the cross-examination of the second witness, the defense counsel likewise put it to Isa Raka that he hadn’t been an eyewitness to the wounding of his wife, and Raka agreed.

In its judgment in the case of the former Serbian president Milan Milutinovic and five other former Serbian officials, the Trial Chamber accepted the evidence of those two witnesses on the expulsion of Kosovo Albanians but dismissed what they said about the murders. In the case of the eleven men killed in the village of Vata, the Trial Chamber found there was no evidence on who was responsible for their deaths because the prosecution failed to call any eyewitnesses of the crime. The judges found Isa Raka’s evidence ‘detailed and credible’, but didn’t even take into consideration the killing of Isa Raka’s pregnant wife as it was not listed in the indictment.