POLICE WITHOUT THE INTERNET

In 1998 and 1999, the police didn’t have an e-mail address, the defense of general Vlastimir Djordjevic contends, and reports on crimes drafted by witness Fred Abrahams and his colleagues from the Human Rights Watch could not be delivered electronically 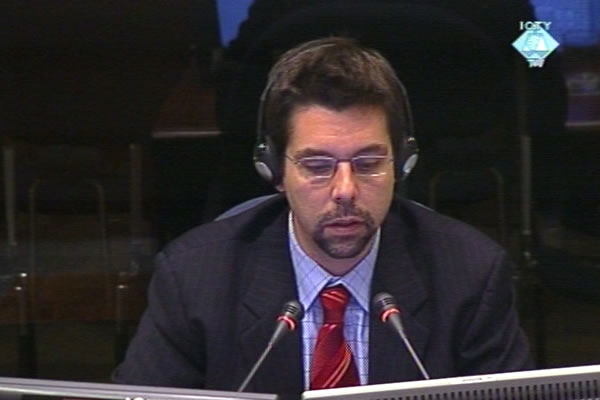 Fred Abrahams, svjedok na suđenju Vlastimiru Đorđeviću
In the cross-examination of Human Rights Watch researcher Fred Abrahams, Vlastimir Djordevic’s defense tried to prove that the reports drafted by that organization about crimes committed by the army and the police against Albanian civilians in 1998 and 1999 never reached the Serbian MUP and the accused chief of the Public Security Department. A number of reports were drafted in 1998 and 1999, the witness recounted yesterday, based on the statement given to the HRW researchers by victims and witnesses of murders, injuries, abuse and expulsions.

As Abrahams explained that he had sent reports by e-mail to a number of Serbian state bodies including the MUP, defense counsel Veljko Djurdjic put it to him that at the time the police didn’t have a web site or an e-mail account. The witness denied this claim saying that the HRW had various e-mail addresses of the Serbian MUP stored in its mailing list, which was regularly updated. However, Abrahams was not able to provide proof that the reports actually reached the police.

When the defense counsel alleged that there was no proof that the reports on crimes against Albanian civilians in the village of Gornje Obrinje in late September 1998 were delivered to the police, Abrahams once again admitted that he was unable to prove it, adding that the information HRW had gathered on that incident was available to the public at large and to the Serbian MUP. All facts concerning the incident, Abrahams said, were also disclosed in the media, noting as an example the reports on the Serbian Radio Television which challenged the HRW allegations, saying that the body of a baby found in the village of Gornje Obrinje had in fact been a doll placed there to foment anti-Serb propaganda.

As he continued his cross-examination, the defense counsel contested the allegations from a HRW report that some Kosovo villages – which the witness visited in 1998 and 1999 – were burned down. According to the defense, the villages suffered damage in the clashes between the Serbian security forces and the KLA. There were obvious signs of deliberate destruction, such as the tearing down of load-bearing columns, Abrahams replied. In his examination-in chief Abrahams said that in most of the destroyed houses there was no damage on the outside as they were set on fire from within. Many photos that corroborate the witness’s testimony according to the prosecution were tendered into evidence.