Fred Abrahams, Human Rights Watch researcher, contends that his organization sent numerous reports on crimes against Kosovo Albanians in 1998 and 1999 to various Serbian authorities, including the Serbian MUP, where the accused Vlastimir Djordjevic held a high rank. According to Abrahams, there was no response, apart from an occasional statement saying that those incidents were in fact clashes with terrorists 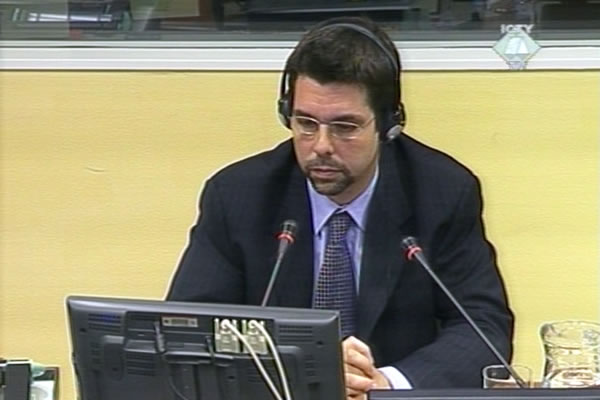 Fred Abrahams, svjedok na suđenju Vlastimiru Đorđeviću
Fred Abrahams, an researcher with the non-governmental organization Human Rights Watch claims that his organization repeatedly warned the Serbian and Yugoslav authorities before the NATO campaign that the army and the police had been committing crimes in the field. In his evidence today at the trial of former Serbian MUP Public Security Department chief Vlastimir Djordjevic, Abrahams described a series of incidents his colleagues and he had recorded in their reports from the field. The reports were then forwarded by the HRW to various authorities. According to Abrahams, the reports were sent to Vlajko Stoiljkovic, interior minister, and other officials of the Serbian MUP.

The first reports of crimes reached the HRW investigators in the spring of 1998, Abrahams said. Those were stories of incidents in which dozens of civilians were killed in the Drenica area, primarily in the village of Prekaze, where KLA commander Adem Jashari was killed together with 58 members of his family. HRW drafted a report about this incident entitled A Week of Terror in Drenica but, as the witness noted, the authorities responded by saying that this was a legitimate fight between the army and police on the one hand and the terrorists.

The next major incident the HRW investigators learned about happened on 28 September 1998 in the village of Gornje Obrinje. Abrahams and his colleague visited the village that day and saw about ten bodies. Two of them were children, three were elderly persons and five were women. Some of them, the witness recounted, had gunshot wounds in their heads while one elderly Albanian had his throat cut. The witness took some photos, which were shown in court and tendered into evidence today. Apart from the murders, HRW reports speak about numerous incidents in which Albanian houses were burned down and mosques destroyed. The Serbian authorities were told about all of that, the witness claims, but they didn’t even try to explain the involvement of the army and the police in those incidents.

Immediately before the NATO campaign was launched in March 1999 Abrahams and others who investigated violations of human rights withdrew from Kosovo, but the HRW mission was not over. HRW investigators were deployed on border crossings and in camps in Macedonia and Albania where they interviewed Kosovo refugees. In the witness’s words, the refugees mostly said that they had been expelled from their villages in a similar way: the Serbian soldiers and police would surround the village and enter it, ordering the women and children to leave and head for the border and men were detained, searched and interrogated. In some cases, the witness said, it was particularly disturbing to hear the refugees tell how the captured men were killed. Abrahams remembered the murders in the villages of Bela Crkva and Meja near Djakovica where – according to eyewitnesses – hundreds of Albanian men were shot to death.

Before Abrahams began his evidence, Vlastimir Djordjevic’s defense objected to the admission of the HRW reports into evidence because the witness was allegedly biased and reported crimes based on hearsay evidence, rather than on eyewitness accounts. The judges will rule on that issue when Abrahams completes his evidence.