POLICE ROLE IN THE MASSACRE IN CELINA

In their evidence Kosovo Albanians Reshit Selimi and Agim Jemini recount how 13 of their relatives were among the 78 Albanian civilians killed in the village of Celina near Orahovac on 25 March 1999. Selimi and Jemini contend that uniformed police officers – at that time under the jurisdiction of accused general Vlastimir Djordjevic – took part in crimes 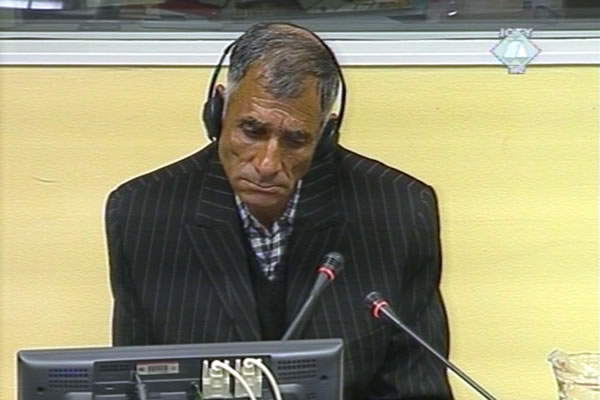 Reshit Salihi, svjedok na suđenju Vlastimiru Đorđeviću
The trial of Serbian police general Vlastimir Djordjevic continued with the evidence of two witnesses who spoke about the events in the village of Celina near Orahovac. Unlike a number of other Albanian civilians, Reshit Selimi and Agim Jemini survived the attack launched by the Serbian army and police against the village on 25 March 1999. General Djordjevic is charged with taking part in the planning and implementation of the deportation and killing of Albanian civilians on Kosovo in the spring of 1999. He was the Public Security Department chief of the Serbian MUP.

According to the evidence of Selimi and Jemini, in the early morning of 25 March 1999 the army shelled the village of Celina from the surrounding mountains. The police and the members of the paramilitary units then entered the village setting Albanian houses on fire and looting them. Selimi saw police officers shoot his brother to death in their family house yard. Selimi later learned that his other brother, his wife and five children were killed that day together with 14 members of the Zeqiri family who lived in the house next door.

[IMAGE]4050[/IMAGE]On 25 March 1999, Agim Jemini hid in the attic of the unfinished family house; from there he saw soldiers in blue and black uniforms looting and burning down houses. Next day, a group of seven or eight soldiers, Jemini noted, brought his parents, uncle and his wife and son from the basement of the house where Jemini was hiding. The soldiers first asked them for money, Jemini recounted. When they took money the soldiers took all five of them out into the street and shot them.

Both witnesses managed somehow to leave the village and join the refugees from Celina and other neighboring villages who took shelter in a nearby forest. Selimi and Jemini then parted as Selimi was in a group of refugees discovered by the Serbian police three days after leaving the village; the refugees were loaded onto trucks and deported to Albania. Jemini, who was the ‘leader’ in Celina, and a group of other men, on the other hand, remained in hiding in the forest.

In the course of the next month, Jemini and other Albanians left the forest to go into the village and locate and bury the bodies of their fellow Albanians. The remains of 78 civilians were found, Jemini said, but it was not the total number of victims as Jemini saw police officers remove the bodies of some of the victims from the village. Several photos taken by the witness when he went to Celina were tendered into evidence. Some of the photos show a number of charred bodies and the body of a girl named Albana Zeqiri.

In his cross-examination of Reshit Selimi, Djordjevic’s defense counsel Veljko Djurdjic implied that the village of Celina was a KLA stronghold. During the attack launched on 25 March 1999, Djurdjic argued, the KLA ‘offered fierce resistance’ to the Serbian security forces. The witness replied he didn’t know anything about that. In his cross-examination, Selimi emphasized the fact that the crimes in the village were perpetrated by ‘the Serbian police only’ and not by the army.

Agim Jemini will be examined by the defense tomorrow.