Former journalist from Kosovo Shefqet Zogaj has described how he and 80,000 of his compatriots were forced to leave the village of Belanica in early April 1999 and cross the Albanian border. The trial of General Vlastimir Djordjevic will be adjourned until 21 April 2009 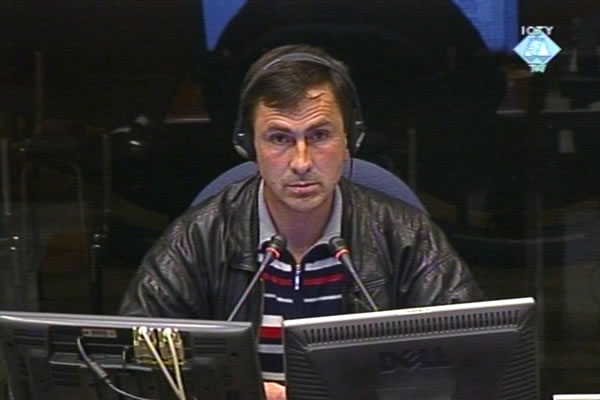 Shefqet Zogaj, svjedok na suđenju Vlastimiru Đorđeviću
At the trial of Vlastimir Djordjevic, chief of the Serbian MUP Public Security Department, on charges of murder and deportation of Kosovo Albanians in 1999, the prosecution went on with its case calling evidence about the crimes in Suva Reka municipality. The court heard evidence of Shefqet Zogaj, former journalist writing for the newspapers Rilindija and Bujku, who was expelled together with a large group of his compatriots from the village of Belanica to Albania in early April 1999.

Some 80,000 civilians from the nearby villages, Zogaj recounted, gathered in the village of Belanica in the last week of March 1999 following the attacks launched by the Serbian troops. On 1 April 1999, Zogaj says, the Serbian army, police and paramilitaries entered the village forcing the people to form a convoy and leave for Albania. As the witness estimated, the column arrived at the border 30 hours later, in the afternoon of 2 April 1999. Along the way the people were robbed and abused. Some were killed. Just before the border the police took everybody’s personal documents away. According to the witness, an armed Serbian civilian stopped the truck the witness was on just before it reached the border, telling the Albanian refugees to leave and never ‘even to take a look at Kosovo because it is Serbian land’.

After he crossed the border to Albania, Zogaj gave a statement to the OTP investigators. He then met with them again in 2001 before he testified at the trial of Slobodan Milosevic. Zogaj also testified at the Kosovo Six trial. Today the transcript of his evidence from that trial and both statements to the OTP were tendered into evidence. On his return to the village of Belanica in June 1999, the witness recounted, he saw that 70 percent of the houses in the village had been destroyed. Photos taken by the witness showing the damage, including his own house that had been burned down, were also tendered into evidence.

Yet again, defense counsel Dragoljub Djordjevic in his cross-examination implied that the KLA members were hiding among the refugees in the column. Zogaj denied this, saying he was sure ‘no KLA members’ were ever among civilians; the witness knew they were in the mountains.

After Zogaj completed his evidence, the prosecution tendered into evidence the statements given of four witnesses who won’t have to appear before the court to be cross-examined according to the Trial Chamber’s decision of 16 March 2009. Witnesses Hadije Fazliu, Hamide Fondaj, Ali Hoti and Florin Krasniqi gave statements to the OTP investigators describing the deportation of Kosovo Albanians from municipalities of Srbica, Suva Reka, Orahovac and Urosevac.