Doctor Shukri Gerxhaliu witnessed the killing of Albanians near the village of Donje Sudimlje on 2 May 1999. Today, he recounted how the Serbian soldiers and policemen told an elderly civilian they would ‘celebrate the wedding together with him’ and then proceeded to kill his son who got married that day. Police general Vlastimir Djordjevic’s defense put it to the witness that the KLA members had mingled with the refugees in the column from which men were singled out and killed 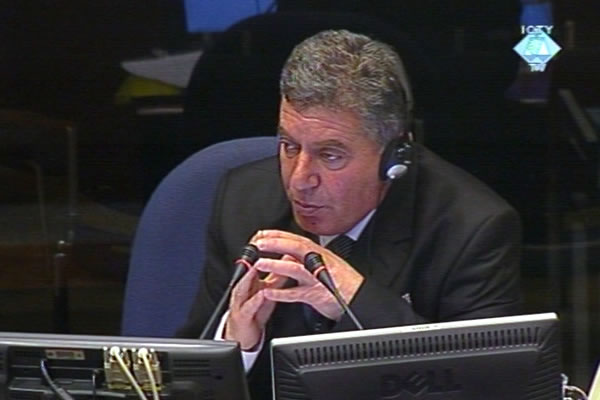 Shukri Gerxhaliu, svjedok na suđenju Vlastimiru Đorđeviću
In his evidence at the trial of Vlastimir Djordjevic, former chief of the Serbian MUP Public Security Department, a doctor from the Kosovo village of Donje Sudimlje Shukri Gerxhaliu described how on 2 May 1999 he managed to avoid the destiny of more than 100 Kosovo Albanians who were singled out from a refugee column and shot on the spot. The list of victims of that incident is appended to the indictment charging General Djordjevic with murder and deportations of Albanian civilians during the NATO campaign.

Gerxhaliu’s statement to the OTP investigators in 2000 was tendered into evidence together with a transcript of his evidence at the trial of Milan Milutinovic and five other former Serbian officials. Today Gerxhaliu repeated most of the things what he had stated then. On 2 May 1999, the witness said, in the villages near Vucitrn a refugee column of 30,000 to 40,000 persons was formed after the rumors spread that the Serbian troops had penetrated the KLA lines in the area. The column, with many members of the Gerxhaliu family, headed towards Vucitrn; the refugees wanted to reach Macedonia or Albania.

The refugees were stopped at a clearing near the village of Donje Sudimlje. Armed men in uniform, identified by the witness as ‘the joint forces of the army, police and paramilitary units’, looted, beat and killed the refugees. Things followed the same pattern, Dr. Gerxhaliu said: the troops would go from tractor to tractor and rob the refugees first. When refugees had no money left, they were abused.

Several Albanian men were killed in his immediate proximity, the witness claimed. He went on to describe the incident that struck him most. At one point, Dr. Gerxhaliu heard an elderly men from a nearby tractor beg the uniformed Serbs not to kill his son as he had just got married that day. The soldiers, Gerxhaliu said, told the man brusquely that ‘now it’s the time to celebrate his wedding together’ and shot the young man to death.

When the attackers were not paying attention, the witness and one of his relatives jumped off the tractor and hid in a nearby creek. They stayed there until the situation calmed down a bit. When Serbian policemen and soldiers went away, they left more than 100 dead people behind.

In his cross-examination, defense counsel Dragoljub Djordjevic implied that the refugee column had been staged for the purposes of the KLA. The soldiers took off their uniforms and mingled with the civilians, withdrawing before the offensive launched by Serbian forces. The witness rejected this allegation, saying that the column consisted of civilians only and that in all likelihood, he was the only KLA member there. In 1998 and 1999, Gerxhaliu worked days in the Vucitrn medical center; at night he would go into the mountains where he treated the wounded KLA soldiers. Therefore, the witness saw himself as a KLA member. The list of victims of a massacre near the village of Sudimlje in the indictment contains the names of a number of men of military age and seven women, most of them elderly.