HUNDREDS WERE KILLED IN DONJE SUDIMLJE

After the massacre in the village of Donje Sudimlje near Vucitrn in the night of 2 May 1999, former president of the Human Rights Council Sadik Kadriu made a list of more than a hundred victims; their names are listed in the appendix of the indictment against police general Vlastimir Djordjevic 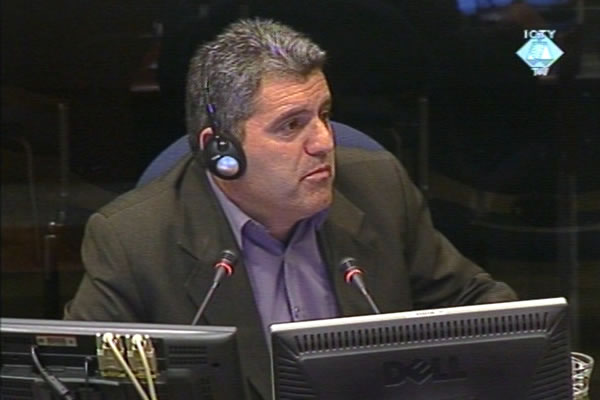 Sadik Kadriu, svjedok na suđenju Vlastimiru Đorđeviću
The appendix of the indictment charging Vlastimir Djordjevic with crimes against Kosovo Albanians lists the names of more than a hundred victims of the massacre in the night of 2 May 1999 in the village of Donje Sudimlje near Vucitrn. Victims were taken out from a column of some 20,000 refugees moving towards the Albanian border. As alleged by the indictment, thousands of refugees were detained that night in a nearby farm and the next day, men of military age were taken to the prison in the village of Smrekovnica.

Sadik Kadriu, the chairman of the Human Rights Council in Vucitrn, was among them. Kadriu spent the next 20 days in prison. When he was let go, the witness explained, he ‘started to investigate’ and drafted a list of about a hundred victims. Kadriu spoke in detail about the massacre near Donje Sudimlje at the trial of Milan Milutinovic and five other former Serbian officials. Today, the transcript of Kadriu’s evidence was admitted into evidence against Vlastimir Djordjevic.

After the war, as the chairman of the Human Rights Council, the witness investigated other crimes against Kosovo Albanians such as the murder of 74 persons on 22 May 1999 near Vucitrn. The bodies of victims were loaded onto trucks and taken to the Special Anti-terrorist Unit (SAJ) training area in Batajnica, Kadriu contends. In Kadriu’s opinion, the ‘accused is responsible’ for that and he ‘should say where the bodies are’, ‘go through a catharsis’ and ‘relieve his soul’. Presiding judge Parker asked to witness to ‘refrain from comments’ while the defense counsel said the accused had to be considered ‘innocent until proven guilty’.

In the cross-examination, General Djordjevic's defense put it to the witness that the Human Rights Council investigated only crimes perpetrated against Albanians. The witness agreed, noting that ‘the rights of Serbs were not violated’. The defense counsel also argued that the KLA members moved together with the civilians in the refugee column, but the witness rejected this as ‘nonsense’.

[IMAGE]4035[/IMAGE]After Kadriu, the prosecution called its next witness, Belgrade pathologist Dusan Dunjic. In 2001, Dunjic, who heads the Belgrade Forensic Medicine Institute, conducted post mortems on some 300 bodies exhumed from the mass grave at the SAJ training area in Batajnica near Belgrade. The prosecution specified that bodies were those of the Berisha family members, killed in Suva Reka, and the victims of the Meja massacre of 27 April 1999. Replying to the questions of the defense, Professor Dunjic said that victims from the first grave, Batajnica 1, had no military items on them. In another grave, Batajnica 2, a man buried there had a pair of camouflage trousers; another one had a string used to clean the rifle barrel in his pocket.