At the trial of police general Vlastimir Djordjevic, the prosecution called evidence on expulsion of tens of thousands of Kosovo Albanians in the Vucitrn municipality in the spring of 1999; 105 Albanians were killed. Fedrije Xhafa has testified about events in which her father was killed, her brother wounded and a part of her family expelled to Albania 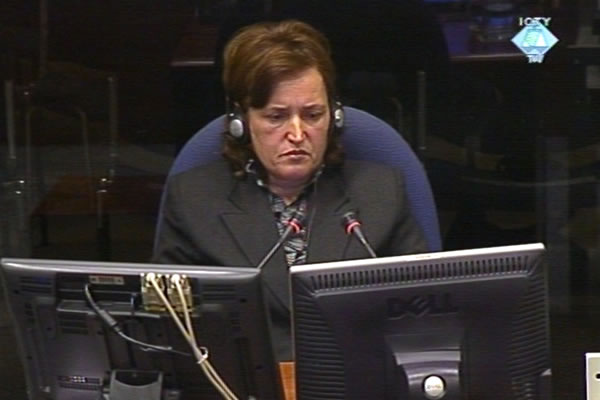 Fedrije Xhafa, svjedok na suđenju Vlastimiru Đorđeviću
In the beginning of the NATO campaign, when the Serbian security forces started burning down Albanian houses in neighboring villages, Fedrije Xhafa, Albanian from Kosovo, and many members of her family fled from the village of Donji Svracak near Vucitrn. She described their calvary during their months as refugees in August 2006 in her statement she gave to the OTP investigators, as well as in her testimony at the trial of the Kosovo Six. Xhafa relived her ordeal today at the trial of Vlastimir Djordjevic, former assistant to the Serbian interior minister and chief of the Public Security Department.

After hiding in the villages around Vucitrn the witness and her relatives joined the refugee column on 2 May 1999; they were stopped by the police in a clearing between the villages of Gornje Sudimlje and Donje Sudimlje. The police, the witness recounted, approached the tractor she was on and repeatedly threatened to kill male family members if they didn’t hand over the money. Sometime later, the witness said, four policemen approached them. They didn’t ask anything: without a word they shot the witness’s brother Jetish in the head. Then her father was taken off the tractor and shot. Her father died on the spot, but her brother miraculously survived.

Other members of the Xhafa family, the witness recounted, got off the tractor and rejoined the convoy. Soon the police ordered everybody with a vehicle to head in direction of Albania. The rest were directed towards Vucitrn. They were forced, the witness noted, to cheer the then FRY president Slobodan Milosevic and Draza Mihailovic, Chetnik war leader in the World War II. On her way to Vucitrn the witness saw a seriously injured young man and the bodies of one of her cousins and several old men. According to her, the young man who tried to join the convoy was shot by the police. The indictment against general Djordjevic alleges that some 105 Kosovo Albanians were killed in the massacre near the village of Sudimlje on 2 May 1999.

When they reached Vucitrn, the witness said, the police separated men from women and children and took most of the former to the prison in Smrekovnica. Only one of the witness’s relatives returned home while others were forced to flee to Albania. Fedrije Xhafa came back to her village two weeks after the Serbian troops left Kosovo. The witness first stayed in a house next door because her house had been burned down.

In his cross-examination, Djordjevic’s defense counsel Veljko Djurdjic spent most of his time on the geography of the Vucitrn municipality and the KLA activities there. Djurdjic for the most part asked the witness to repeat what she had already said in her examination-in chief and in her statement to the OTP investigators. The defense counsel tried to prove that the witness didn’t distinguish between the army and the police. The men who killed her father, wounded her brother and took other men to prison wore blue camouflage uniforms, the witness replied, which led her to conclusion that they were police officers.