Lawyer from Kosovska Mitrovica Mahmut Halimi described how he avoided the fate of his two friends who were killed in the night of 24 March 1999. After three weeks in hiding, Halimi ended up in Albania 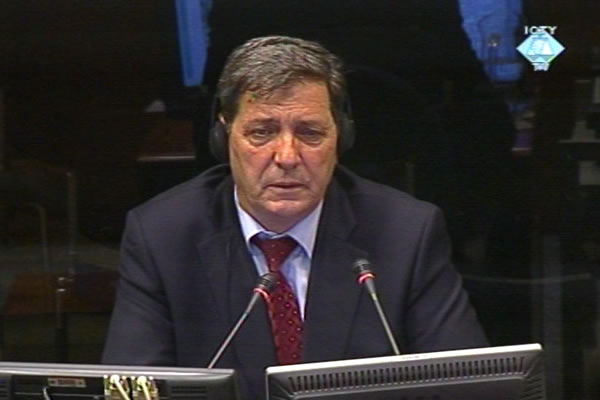 Mahmut Halimi, svjedok na suđenju Vlastimiru Đorđeviću
The indictment against former chief of the Serbian police public security department Vlastimir Djordjevic charges him with murder of several thousands and deportation of some 800,000 Kosovo Albanians, and describes in detail the events in Kosovska Mitrovica in the spring of 1999. The residents of that municipality were forced to abandon their houses and find accommodation in nearby villages. Then, three weeks after the NATO campaign started, they were once again forced to leave in convoys towards the Albanian border. That was the fate of lawyer Mahmut Halimi, the first prosecution witness to give evidence on the events in Kosovska Mitrovica.

In his testimony, Halimi described how, after several threatening phone calls, on 25 March 1999 he received a ‘friendly’ message. An unknown female called him on the phone and told him to leave his house in Kosovska Mitrovica as soon as possible because there were plans to kill him. Halimi quickly gathered his belongings – he had packed already – and drove to a nearby village of Zabar with his wife and four children. Thus he was able to avoid the fate of his friends, trade union activists Latif Berisha and Agim Hajrizi who were killed in the night of 24 March 1999.

Three weeks later, in mid-April 1999, a column of refugees escorted by the police passed through the village of Zabar. Halimi estimated there were 25,000 to 30,000 persons in the column. Villagers were ordered to join the column and on 17 April 1999 the witness and his family headed for the Albanian border. The police searched all the refugees even before the column arrived in Zabar, the witness contended. The looting and abuse continued until the refugees reached the border.

In an attempt to challenge the credibility of the witness, the defense counsel reminded the witness of the days when he worked as a lawyer in Kosovska Mitrovica and, according to his own admission at the trials of Slobodan Milosevic and the Kosovo Six, bribed Serb judges. Halimi replied that this was the only way for ‘Albanians to get justice in Kosovo’. Djuric then asked him if he thought he had the ‘moral credentials’ to apply for the post of a district court judge after the NATO campaign. ‘When this war ended, we left all the bad things and all the things we had been forced to do behind’, Halimi said. Halimi was the presiding judge in the Trial Chamber that tried former police officer Nenad Pavicevic who was sentenced in absentia to 20 years for murder of trade union activist Agim Hajrizi.

As today’s hearing drew to a close, Sadije Sadiku, an Albanian woman from the village of Zabar near Mitrovica, began her evidence. In the spring of 1999 she was shot by a sniper in the spine and is now paralyzed.